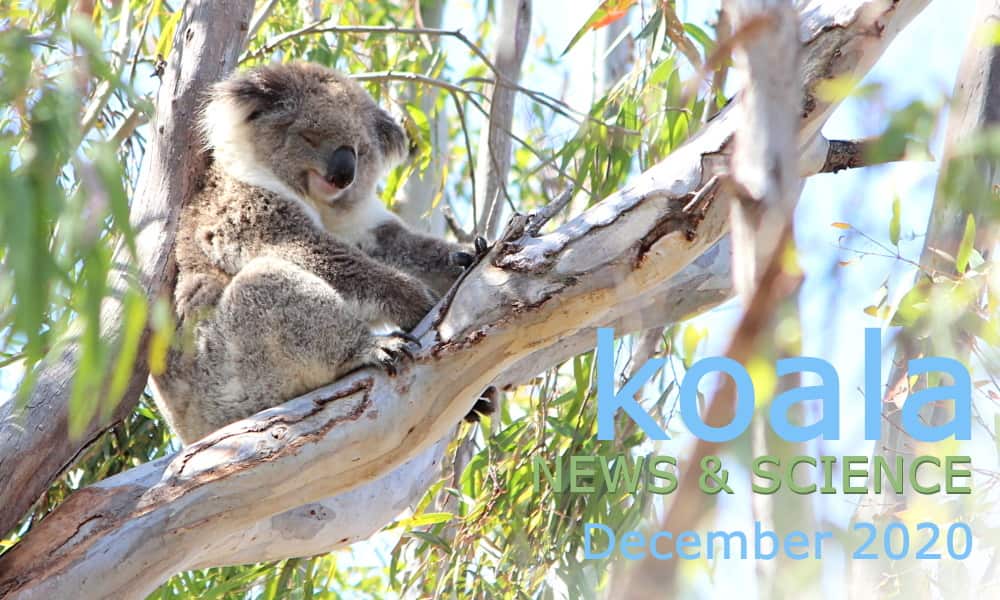 Koala Clancy Foundation recognised with $9000 grant by City of Greater Geelong. The grant will fund tree planting in a grassy woodland.
https://www.geelongaustralia.com.au/news/item/8d8a5a546730546.aspx

Mobile trailer signs flashing Crikey Koalas! Slow Down Koala Hotspot” are being trialled around Lismore, with traffic speed meters monitored to show if drivers slow down. The initiative is being supported by Friends Of The Koala and Lismore City Council.
https://www.nbnnews.com.au/2020/12/21/crickey-watch-out-koala-signs-rolled-out-in-hotspots/

61,000 koalas are estimated to have died or been affected by the megafires of 2019-2020, according to a WWF-commissioned report by 10 scientists including Chris Dickman. They are amongst an estimated 143million mammals affected, in one of the worst wildlife disasters in modern history.
https://www.theguardian.com/australia-news/2020/dec/07/devastating-more-than-61000-koalas-among-3-billion-animals-affected-by-bushfire-crisis

Researchers at Queensland University of Technology led by A/Prof Grant Hamilton have been using photographs to assist a computer receiving thermal drone cameras to learn to recognise a koala from other animals and warm inanimate objects. The project will help support drone-based koala counts.
https://www.techrepublic.com/article/aussie-ai-researchers-use-ai-enabled-drones-to-protect-the-iconic-koala/

Koalas around mid north coast of NSW have hundreds of new trees thanks to Gloucester Environment Group.
https://www.gloucesteradvocate.com.au/story/7030265/gloucester-environment-group-plant-koala-habitats/

Greenfleet have revegetated 40 hectares of a private farm at Ness Creek, south Gippsland, for wildlife including koalas, Swamp Wallabies and gliders. The first plantings in 2016 are now up to 7metres high.
https://www.greenfleet.com.au/news/growing-koala-habitat-gippsland

Overabundant herbivorous mammals can increase the mortality rates of preferred food species, causing long-term changes to plant communities. When lethal control of the herbivore is not possible, fertility control is often advocated as a management solution. There is, however, little empirical evidence that fertility control is a viable option for managing the impacts of open populations of polygynous mammals. We evaluated the effectiveness of two long-term fertility control programs implemented to reduce overabundant koala (Phascolarctos cinereus) populations and their impacts on preferred food trees (manna gum, Eucalyptus viminalis): one in Victoria (10 years) and one in South Australia (17 years). Fertility control reduced koala recruitment such that population densities more than halved at both sites. Mortality rates of manna gum trees were significantly reduced at one site, and trees with light or moderate defoliation recovered at both sites. Relationships between koala population density and canopy defoliation suggest that if management wishes to alleviate moderate browsing pressure then koala density should be maintained below 1.0 koala/ha. We conclude that population-level fertility control can significantly reduce overabundant koala populations and some of their impacts on food trees. Our empirical study demonstrates that long-term fertility control can reduce the undesirable impacts of open populations of polygynous mammals.

This article addresses the question as to why such a much loved and iconic Australian animal—the koala—has long been headed on a trajectory of extinction; primarily due to a lack of public concern and political will. Despite the affectionate regard in which they are held, koalas remain out of sight and out of mind for most Australians. However, the widely publicized catastrophic Australian bushfire season of 2019–2020 is a rare and illuminating case in which public support for koala welfare was stimulated by significant national and international media attention. The primary problem facing koala conservation was thrown into sharp relief—the need to proactively protect them from human activities destroying their habitat. This article explores how a marketer‐lead intervention, employing cultural branding, story‐telling, and personification, could potentially motivate the public to apply pressure at all levels of government to proactively protect the koala’s habitat and grow their numbers. This solution is grounded in an awareness of several issues likely to impact its success, including: (1) the koala’s biology and behavior, (2) uncertainty around koala population numbers, (3) the emergence of the koala as an (inter)national) icon, (4) the Australian 2019–2020 bushfire emergency, (5) postfire complacency, (6) Lewis and other koala stories, (7) acknowledging competing interests, and (8) taking learnings forward. Finally, the proposed campaign centers on forging emotional links between the koala and consumers, which are likely to positively impact consumers’ attitudes, information processing and memory functions associated with messages highlighting the need to preserve the koala’s habitat.

Determining the information content of vocal signals and understanding morphological modifications of vocal anatomy are key steps towards revealing the selection pressures acting on a given species’ vocal communication system. Here, we used a combination of acoustic and anatomical data to investigate whether male koala bellows provide reliable information on the caller’s body size, and to confirm whether male koalas have a permanently descended larynx. Our results indicate that the spectral prominences of male koala bellows are formants (vocal tract resonances), and show that larger males have lower formant spacing. In contrast, no relationship between body size and the fundamental frequency was found. Anatomical investigations revealed that male koalas have a permanently descended larynx: the first example of this in a marsupial. Furthermore, we found a deeply anchored sternothyroid muscle that could allow male koalas to retract their larynx into the thorax. While this would explain the low formant spacing of the exhalation and initial inhalation phases of male bellows, further research will be required to reveal the anatomical basis for the formant spacing of the later inhalation phases, which is predictive of vocal tract lengths of around 50 cm (nearly the length of an adult koala’s body). Taken together, these findings show that the formant spacing of male koala bellows has the potential to provide receivers with reliable information on the caller’s body size, and reveal that vocal adaptations allowing callers to exaggerate (or maximise) the acoustic impression of their size have evolved independently in marsupials and placental mammals.