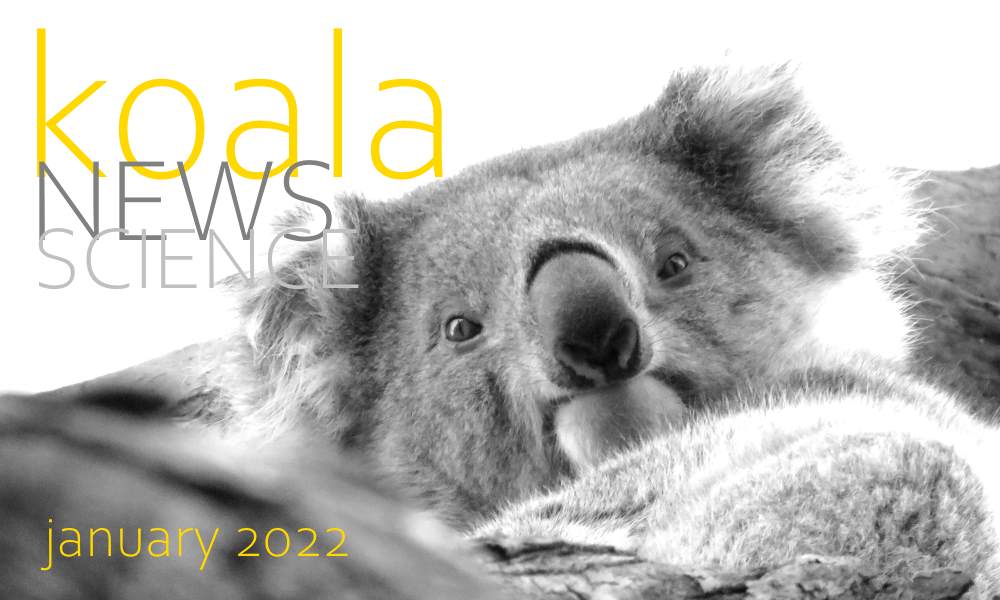 Federal Government bows to pressure & allocates $50million, but no relief on land clearing 28 January
Koalas are now being seen as a vote-winner, as shown by the recent, pre-election federal government announcement of an extra $50 million for koalas over 4 years. The extra funding is promised for the government’s koala survey, koala health research and habitat restoration. Environment groups have been quick to note that there’s been no announcement of any reduction in the scale of habitat destruction, so while the extra funding is welcome, it looks like a bandaid approach to conservation.
https://www.smh.com.au/politics/federal/government-commits-50-million-to-save-koalas-20220128-p59s2t.html
https://7news.com.au/weather/environment/govt-allocates-50m-to-help-protect-koalas-c-5487145

Koalas in far eastern Victoria contribute to Australia-wide genome project 23 January
Dr Desley Whisson from Deakin University & Dr Kita Ashman from WWF sampled Gelantipy koalas to contribute their genes to the University of Sydney’s koala genome project. The project is the first of its kind done for any animal, other than humans, worldwide.
https://www.smh.com.au/environment/climate-change/koala-genome-probe-to-unravel-genetic-mysteries-20220123-p59qgb.html#

How to make koala plantations palatable – workshop presentations available
ANU scientists Dr Kara Youngentob & Dr Karen Marsh presented the first workshop in December 2021, sharing their work on nutritional versus toxic qualities of different species and individual trees used by koalas & other marsupial folivores. They also showed the influence of temperature on koalas’ ability to process toxins, and the influence of altitude. The workshop was supported by WWF.
https://www.restoringnutritionallandscapes.com/

Chlamydia vaccine trial seems to be working Gold Coast QLD 26 January
Queensland University of Technology & Currumbin Wildlife Hospital have vaccinated 154 koalas over the last year, before releasing them to the wild. One vaccinated female has been recaptured, is negative for chlamydia and pregnant.
https://www.aap.com.au/news/vaccine-trial-offers-hope-for-koalas/

Doxycycline is an antimicrobial used for treating chlamydial infections in various species, including the koala. The dose and route of administration used initially are based on first principles. Therefore, this study investigates the absorption, distribution, metabolism, and excretion of subcutaneous doxycycline injections, and evaluates the suitability of the current dosage regimen for inhibiting chlamydial pathogens. The results suggest that the current doxycycline dosage remained therapeutically effective for up to six days after each dose, with some accumulation over successive doses. All koalas in the study improved clinically and tested negative for chlamydial pathogens post-treatment before being released. This study contributes to determining the optimal dosage of doxycycline to treat chlamydiosis safely and effectively in infected koalas.

In this study we compared the faecal microbiomes of wild joey koalas (Phascolarctos cinereus) to those of adults, including their mothers, to establish whether gut microbiome maturation and inheritance in the wild is comparable to that seen in captivity. Our findings suggest that joey koala microbiomes slowly shift towards an adult assemblage between 6 and 12 months of age, as the microbiomes of 9-month-old joeys were more similar to those of adults than those of 7-month-olds, but still distinct. At the phylum level, differences between joeys and adults were broadly consistent with those in captivity, with Firmicutes increasing in relative abundance over the joeys’ development and Proteobacteria decreasing. Of the fibre-degrading genes that increased in abundance over the development of captive joeys, those involved in hemicellulose and cellulose degradation, but not pectin degradation, were also generally found in higher abundance in adult wild koalas compared to 7-month-olds. Greater maternal inheritance of the faecal microbiome was seen in wild than in captive koalas, presumably due to the more solitary nature of wild koalas. This strong maternal inheritance of the gut microbiome could contribute to the development of localized differences in microbiome composition, population health and diet through spatial clustering of relatives.

Australian mammals are generally considered fondly, however there are particular trends in the way that they are represented in museums and other educational settings which inadvertently perpetuate a colonial view of these species by inferring relative inferiority. These tropes include describing species as ‘weird and wonderful’, ‘strange’, ‘peculiar’ and primitive; using often unhelpful comparisons with placental mammals; implying that convergent evolution is directional; the ways that placental-derived names deny Australian mammals an individuality; and the notion that ‘everything in Australia is trying to kill you’. While these practices appear harmless, they risk devaluing and othering Australian wildlife. This paper traces the origins of these habits among early colonial accounts of Australia, and concludes that value judgements continue to be applied to Australian species, unlike animals from elsewhere. These subconscious suggestions that Australian animals are inferior have inevitable impact on the ability to lobby for their conservation; and were intertwined with political arguments for the British invasion and colonisation of Australia, which has had profound impacts on Indigenous Australians.

The growing field of conservation and wild animal ethics has the potential to guide practitioners facing difficult management decisions. Drawing from previously established rights frameworks, we explore an applied ethic for wildlife managers and conservationists, outlining when there can be ethical justification and moral obligation to intervene with wildlife. To demonstrate the use of this ethical framework, we apply it specifically to the emerging field of behavioral training in wildlife management. We use a series of case studies to illuminate how ecological context is fundamental to ascertain when there is ethical justification for behavioral training under the framework, and conclude with practical considerations for implementation. Our work explains how a rights-based ethic emerges from both biological principles and fundamental philosophical concepts, and illustrates how it could serve as a useful guideline for wildlife management.

Reported declines in Koala numbers in the Pilliga Forest, New South Wales, Australia an area likely to be susceptible to climate change, were investigated by comparing surveys of 45 transects undertaken in 1993 and 1994 with replicated surveys in 2011. These surveys measured both presence/absence and estimated population density and provide preliminary evidence of a significant decline of the Koala population in the Pilliga forests with a >75% reduction in detection rate between 1993 and 2011. The reasons for this apparent decline are not clear though cannot be easily attributed to disease, habitat loss, traffic collisions or dog attacks which are key factors Koala decline in other parts of Australia. A comparison of weather data from the study area in the ten years prior to each survey period is presented here. The ten years prior to the 2011 survey show a hotter average mean monthly temperature and significantly more days with an ambient maximum above 40°C when compared to the 10-period before 1994 with no difference in rainfall against the trend expected in the Southern Oscillation Index. The dry heatwave years between 2002 and 2009 correspond to the time when it appears Koalas numbers significantly declined. This important population, estimated to be 5-10,000 animals in size in 1993, urgently requires detailed ongoing monitoring to assess the extent of any recovery, identification of refuge areas as well as ongoing monitoring of feed tree health.
..