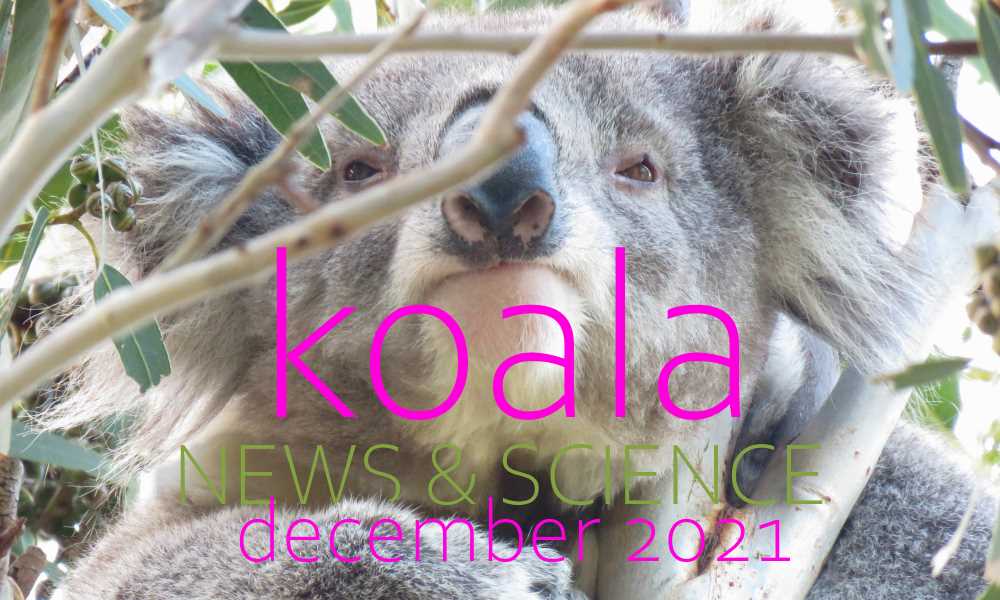 Koala sighting on NSW south coast 2 December
A single koala was spotted at Wapengo, and filmed and photographed by a passerby. The area has a small koala population and every individual sighting is of interest.
https://www.begadistrictnews.com.au/story/7534003/exciting-footage-of-koala-on-far-south-coast/

How do koalas eat? VIC 28 December
A report on koala feeding behaviour in the You Yangs, Victoria.
https://www.koalaclancyfoundation.org.au/how-do-koalas-eat/

Facts & figures on roadkill in Australia and ideas for reducing it 30 December
Important article in the Sydney Morning Herald about wildlife mortality on roads, and the effectiveness of wildlife bridges and underpasses.
https://www.smh.com.au/national/the-horrible-thud-what-can-we-do-to-reduce-roadkill-20211103-p595t5.html

New koala rehabilitation centre opens at Richmond NSW 16 December
The new centre on the Hawkesbury campus of Western Sydney University that was funded by WIRES bushfire donations, has opened.
https://www.miragenews.com/monty-becomes-first-patient-at-new-koala-695462/

There is growing evidence that Chlamydia pecorum infection of the male koala reproductive tract causes inflammation and pathology of the urogenital tract. Previous studies have revealed that male koalas exhibiting severe clinical signs of urogenital chlamydial disease had an increased incidence of sperm DNA fragmentation and abnormal sperm morphology, suggestive of chronic exposure to C. pecorum infection and/or inflammation in the testis and epididymis, with residual pathology and lesions disrupting spermatogenesis and maturation of spermatozoa. This study specifically aimed to determine whether pathology associated with chlamydial infection in different regions of the male koala reproductive tract had an adverse effect on classical seminal parameters, sperm DNA quality and endocrine function (testosterone secretion) of naturally infected males. Semen from 58 sexually mature male koalas deemed not suitable for rehabilitation or treatment was assessed, in addition to undertaking a GnRH challenge to determine the androgenic capacity of the testis. Following euthanasia, tissue samples from testes, epididymis and prostate were evaluated for histopathology and real time polymerase chain reaction (qPCR). A significant difference in sperm concentration was observed between males with unilateral and bilateral testicular atrophy and C. pecorum infection (P = 0.011); and between males with unilateral atrophy and C. pecorum infection in one testis and bilateral normal testes with no C. pecorum infection (P = 0.008). No significant association was found for any other semen parameters when categorised by histopathology and C. pecorum tissue presence within the testes, epididymis and prostate. Plasma testosterone concentrations did not significantly differ between testicular histopathology diagnosis and/or C. pecorum infection status. This study suggests Chlamydia infection and inflammation may not be the predominant reason of disruption to spermatogenesis in the wild koala but rather testicular degeneration and atrophy, irrespective of Chlamydia infection, appears to be the primary reason of decreased sperm concentration.

Koalas can be injured by cars and bushfires, and be affected by painful infectious diseases. When koalas undergo surgery to repair broken bones, they require analgesia. Fentanyl is a potent opioid that can be administered during surgery to provide analgesia. This study describes the rate of elimination of fentanyl in koalas’ blood when administered as a single intravenous injection and consequently calculates the dose rate to administer a constant rate fentanyl infusion into the koalas’ veins to provide short-term pain control. Fentanyl can also be absorbed via the skin into the circulation when applied as a transdermal patch. Although the data for transdermal fentanyl patch absorption is from two koalas only, the results demonstrate that when a patch is applied, pain control is likely to occur 12 h after application to koalas’ skin. Fentanyl may provide effective pain control to koalas either as an intravenous infusion or as a transdermal patch.
Fentanyl was administered as a single intravenous bolus injection at 5 µg/kg to five koalas and fentanyl plasma concentrations for a minimum of 2 h were quantified by an enzyme-linked immunosorbent assay (ELISA). The median (range) fentanyl elimination half-life and clearance were 0.53 (0.38–0.91) h, and 10.01 (7.03–11.69) L/kg/h, respectively. Assuming an analgesic therapeutic plasma concentration of 0.23 ng/mL (extrapolated from human studies), an intravenous constant infusion rate was estimated at approximately between 1.7 to 2.7 µg/kg/h (using the clearance 95% confidence intervals). A transdermal fentanyl patch was applied to the antebrachium of an additional two koalas for 72 h. Fentanyl plasma concentrations were determined during the patch application and after patch removal at 80 h. The fentanyl plasma concentration was greater than 0.23 ng/mL after 12 to 16 h. While the patch was applied, the maximum fentanyl concentration was approximately 0.7 ng/mL from 32 to 72 h. Fentanyl plasma concentrations increased to 0.89 ng/mL 1 h after the patch was removed, and then decreased to a mean of 0.47 ng/mL at 80 h. The transdermal fentanyl patch is likely to provide some level of analgesia but should be initially co-administered with another faster acting analgesic for the first 12 h.

The acquisition and maturation of the gastrointestinal microbiome is a crucial aspect of mammalian development, particularly for specialist herbivores such as the koala (Phascolarctos cinereus). Joey koalas are thought to be inoculated with microorganisms by feeding on specialized maternal faeces (pap). We found that compared to faeces, pap has higher microbial density, higher microbial evenness and a higher proportion of rare taxa, which may facilitate the establishment of those taxa in joey koalas. We show that the microbiomes of captive joey koalas were on average more similar to those of their mothers than to other koalas, indicating strong maternal inheritance of the faecal microbiome, which can lead to intergenerational gut dysbiosis when the mother is ill. Directly after pap feeding, the joey koalas’ microbiomes were enriched for milk-associated bacteria including Bacteroides fragilis, suggesting a conserved role for this species across mammalian taxa. The joeys’ microbiomes then changed slowly over 5 months to resemble those of adults by 1 year of age. The relative abundance of fibrolytic bacteria and genes involved in the degradation of plant cell walls also increased in the infants over this time, likely in response to an increased proportion of Eucalyptus leaves in their diets.
..

The immense size, varied land systems, different climatic regimes, and great antiquity of the Australian landmass have fostered the development of an extraordinarily rich and endemic biota. Yet, despite the importance of this unique natural heritage, evidence is mounting that Australia’s living systems are under increasing assault. On land, the major threats faced by the biota include land clearing and fragmentation, pressures from livestock production, pest species and pathogens, consumption and extraction of natural resources, altered fire regimes, climate change and climate variability, and interactions between these drivers. Equivalent pressures face the biota of aquatic environments, with climate change interacting with other threats to produce poor prognoses for the future of freshwater resources and major marine ecosystems such as the Great Barrier Reef. Despite the success of some conservation programs, the varied threats to Australia’s fragile environment are exacerbated by the demands of the nation’s burgeoning human population and the generally apathetic response of government to the manifest problems. We suggest that the Australian environment can be seen as a ‘canary in the climate coal mine’—an early herald of global environmental decline—and that more recognition of the problems, more courage, more resources and stronger laws will be crucial if any semblance of ecological sustainability is to be achieved.