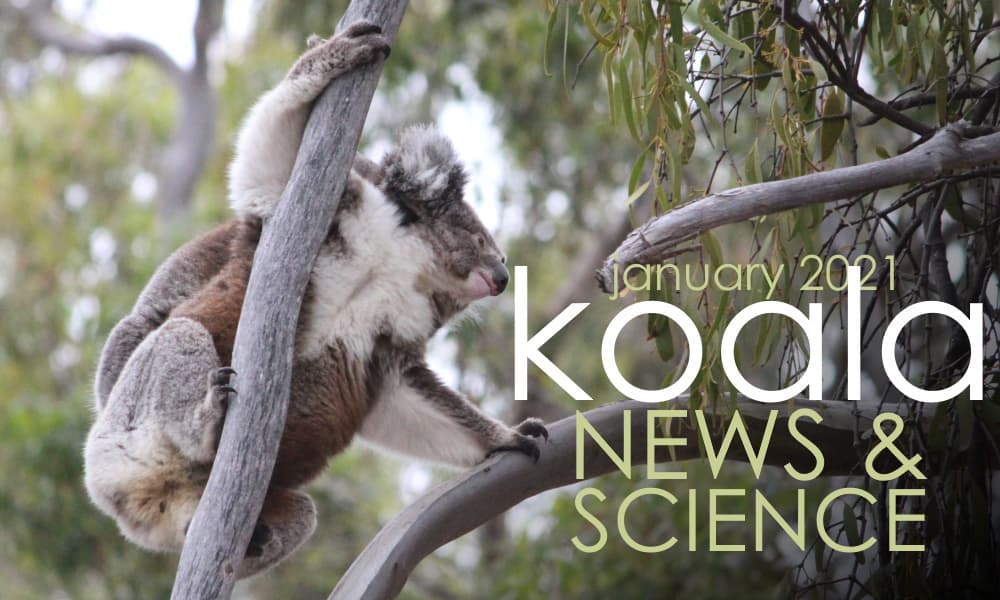 Lorraine Vass has been awarded an Order of Australia for significant service to wildlife conservation. Lorraine was president of Friends Of The Koala, based in NSW Northern Rivers, for 15 years.
https://www.smh.com.au/national/nsw/northern-rivers-koala-conservationist-receives-australia-day-honour-20210125-p56wpm.html?fbclid=IwAR01kQ_IJYIWTt1bzVBzT26KE69yzvauiAeUuUF7UIExxlc8t1KZKeUZZwQ

University of Western Australia & DNA Zoo have completed a chromosome-length assembly of the Koala genome, which will help researchers study the genes in 3D.
https://theconversation.com/a-new-3d-koala-genome-will-aid-efforts-to-defend-the-threatened-species-153873

A koala joey had been spotted with its mother in Aussie Ark’s new fenced 7000 ha sanctuary at Barrington Tops, northern NSW
https://www.ausleisure.com.au/news/aussie-ark-spots-first-koala-joey-in-barrington-wildlife-sanctuary/

Koalas nominated as one of the crucial environmental battles looming in Australia by The Guardian
https://www.theguardian.com/environment/2021/jan/25/net-zero-saving-koalas-and-forest-wars-the-crucial-environment-battles-looming-in-australia

LendLease has started work on the controversial Figtree Hill development in Macarthur, near Sydney, but experts warn that their hard-earned global reputation for sustainable developments is at risk. https://www.abc.net.au/news/2021-01-14/lendlease-sustainability-reputation-figtree-hill-development/13058076

ABC Science article deals with myths that koalas are stoned, that they are cuddly and friendly, and that they are picky eaters.
https://www.abc.net.au/news/science/2021-01-17/koala-behaviour-myths-misconceptions-drop-bears-eucalpyts-mating/12985910

Detection Dogs For Conservation’s Romane Cristecu talks to 2GB about koala-detecting dog Maya and the difficulties of finding koalas in the wild.
https://www.2gb.com/how-a-controversial-approach-saved-koalas-in-the-black-summer-bush-fires/

New technology, drones and AI could build a future dataset of biodiversity, according to University of Newcastle researcher Dr Ryan Witt.
https://www.abc.net.au/news/science/2021-01-10/black-summer-fires-koalas-drones-monitoring-population/13035820

The profits from sales of the new childrens book “Up In The Trees Under The Stars” by Jacqueline Salisbury, a volunteer at the Port Macquarie Koala Hospital, will go to the hospital. The book stars several of the hospitals koala patients.
https://www.portnews.com.au/story/7058643/new-storybook-tells-fictional-tale-of-koala-adventures/

The impact of bushfire events on wild Koala (Phascolarctos cinereus) populations is poorly understood. Following the 2019/2020 bushfire season in eastern Australia, we resurveyed 123 field sites for which contemporaneous (current koala generation) pre‐fire survey data were available. Field sites were distributed across six fire grounds between Foster and Ballina on the north coast of New South Wales. At these sites, pre‐fire naïve occupancy levels by koalas ranged from 25% to 71% of the sampled habitat, while post‐fire naïve occupancy levels ranged from 0% to 47%. The median reduction in the naïve occupancy rate by koalas when considered across all six fire grounds was 71% when standardized against pre‐fire occupancy levels. Field data provided strong corroboration between site‐based, post‐fire foliage canopy cover estimates and modelled Google Earth Engine Burnt Area Map (GEEBAM) fire‐severity categories. In terms of GEEBAM fire‐severity categories, koala survival was five times more likely in areas where forest canopies were modelled as Unburnt or Partially burnt, compared to areas where forest canopies were Fully burnt. The capacity of bushfire‐affected koala populations to recover from the 2019/20 fire season will be conditional upon size of the original population in each fire‐affected area, the enactment and implementation of supportive, recovery‐themed management regimes, future inter‐fire intervals and associated intensities. Management actions necessary to assist recovery actions are discussed.

Land clearing for agriculture results in fragmented landscapes with diminished resources for wildlife. Habitat loss and fragmentation are widespread problems; however, their impacts are rarely assessed simultaneously at multiple spatial and temporal scales. We used a focal site, multiscale design to examine how landscape characteristics that affect the probability of koala Phascolarctos cinereus presence varies over multiple spatial and temporal scales in a fragmented rural landscape in north‐western New South Wales, Australia. We modelled the effect of variables representing landscape characteristics at three spatial extents – transect, patch and site – over three seasonal periods (mid‐spring, late‐spring and mid‐summer). Koala activity level (as determined by faecal pellets) varied between surveys, and identifies short‐term seasonal changes in habitat use. Koala presence had the strongest association with patch scale variables (habitat suitability, soil fertility and patch area). Temporal variation in the effect of tree and landscape characteristics on koala presence highlights the limitations of surveys at a single point in time, and emphasizes that further research is needed to advance our understanding of what drives temporal variation in koala habitat use at multiple spatial scales. Our results show that to arrest declining koala populations in rural agricultural landscapes, conservation and management plans must consider landscape scale processes over a variety of time scales, and engage stakeholders across multiple properties and tenures, to conserve both disturbed and suitable habitat on private land.