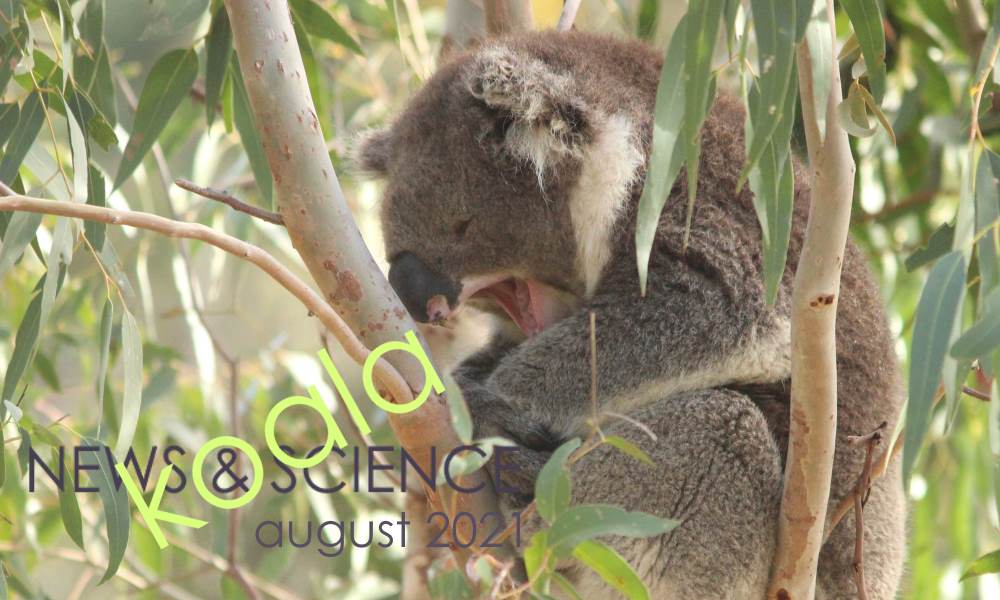 Conservation groups will soon be able to survey for wildlife using QUT AI. 3 September
QUT drone technology developed for spotting koalas will now be expanded to include other species, and will be available for Landcare and conservation groups to survey for wildlife, and submit data to QUT for analysis.
https://noosatoday.com.au/news/03-09-2021/drone-system-monitors-koala-populations/

21,000+ koala trees planted around the You Yangs VIC 4 September
Koala Clancy Foundation have achieved their goal of planting 20,000 koala trees in the Little, Barwon & Moorabool River valleys this season, with a few weeks to spare.
https://www.koalaclancyfoundation.org.au/2021-koala-trees-planted-australia/

Lindt partners with AKF on Koala Kiss Corridor project 1 September
The chocolatier has produced a limited-edition chocolate koala for Save The Koala month, and will donate $1 from each purchase to Australian Koala Foundation’s Koala Kiss project.
https://www.savethekoala.com/our-work/kiss
https://7news.com.au/lifestyle/food/lindt-releases-new-chocolate-to-help-fund-australian-koala-foundations-koala-kiss-project-c-3839888

The aims of this study were to investigate the proteome of koala spermatozoa and that of the prostatic bodies with which they interact during ejaculation. For this purpose, spermatozoa and prostatic bodies were fractionated from the semen of four male koalas and analysed by HPLC MS/MS. This strategy identified 744 sperm and 1297 prostatic body proteins, which were subsequently attributed to 482 and 776 unique gene products, respectively. Gene ontology curation of the sperm proteome revealed an abundance of proteins mapping to the canonical sirtuin and 14-3-3 signalling pathways. By contrast, protein ubiquitination and unfolded protein response pathways dominated the equivalent analysis of proteins uniquely identified in prostatic bodies. Koala sperm proteins featured an enrichment of those mapping to the functional categories of cellular compromise/inflammatory response, whilst those of the prostatic body revealed an over-representation of molecular chaperone and stress-related proteins. Cross-species comparisons demonstrated that the koala sperm proteome displays greater conservation with that of eutherians (human; 93%) as opposed to reptile (crocodile; 39%) and avian (rooster; 27%) spermatozoa. Together, this work contributes to our overall understanding of the core sperm proteome and has identified biomarkers that may contribute to the exceptional longevity of koala spermatozoa during ex vivo storage.

Case problem: How can we enable people to protect koalas?

Chapter overview: Koalas are an Australian icon but their population is declining significantly. Koalas are especially vulnerable to injury or mortality from vehicle strike and dog attacks. Injury and death are more common during dispersal and breeding seasons when koalas are more active, travelling to seek out a new home range or mate. Hence, it is important to develop strategies to raise awareness during peak movement periods. This chapter reports a city-wide communication campaign that aims to activate community driven koala conservation actions. The aim of the communication campaign was to increase local residents’ awareness and improve community information on how to successfully coexist with and protect koalas. An integrated communication approach was implemented and advertising channels including billboards, social media, bus backs, bus shelters, cinema, print media, flyers and posters were used to disseminate messages throughout the city area. The campaign delivered positive outcomes increasing residents’ awareness, changing attitudes and behaviours. The data on the reach of the campaign indicates that a wide reach was achieved. Outcome evaluation results indicated that attitudes towards koala conservation improved after the campaign.

Koalas (Phascolarctos cinereus) are one of Australia’s most charismatic native small marsupial species. Unfortunately, populations of koalas are rapidly declining throughout Australia and they continue to face increasing pressure from a changing ecosystem. Negative stimulants in the environment can elicit stress responses through activation of the hypothalamic-pituitary-adrenal (HPA) axis. Depending on the duration of the negative stimulant, the stress response can lead to either acute or chronic side effects, and is shown through the activation of the neuroendocrine stress system and the release of glucocorticoids (e.g., cortisol). Wild koalas entering clinical care face novel stressors that can be out of a wildlife carer’s control. In this pilot study, we monitored physiological stress in three wild koalas at a wildlife rehabilitation centre in New South Wales, Australia. Acute and chronic stress was indexed non-invasively, with faecal samples taken to evaluate acute stress, and fur samples taken to evaluate chronic stress. Sampling occurred sporadically over four months, from the start of September 2018 to the end of December 2018. Results attempt to understand the stress response of koalas to negative stimulants in the environment by comparing faecal glucocorticoids on days where a known stressor was recorded with days where no known stressor was recorded. Furthermore, variations in faecal and fur glucocorticoids were compared between the three koalas in this study. To our knowledge, this is the first evidence of stress tracking of wild rescued koalas in a sanctuary. We suggest that further monitoring of baseline, acute and chronic stress will be needed to better understand how koalas respond to negative stimulants associated with clinical care.

Background
The diet of the koala (Phascolarctos cinereus) is comprised almost exclusively of foliage from the genus Eucalyptus (family Myrtaceae). Eucalyptus produces a wide variety of potentially toxic plant secondary metabolites which have evolved as chemical defences against herbivory. The koala is classified as an obligate dietary specialist, and although dietary specialisation is rare in mammalian herbivores, it has been found elsewhere to promote a highly-conserved but low-diversity gut microbiome. The gut microbes of dietary specialists have been found sometimes to enhance tolerance of dietary PSMs, facilitating competition-free access to food. Although the koala and its gut microbes have evolved together to utilise a low nutrient, potentially toxic diet, their gut microbiome has not previously been assessed in conjunction with diet quality. Thus, linking the two may provide new insights in to the ability of the koala to extract nutrients and detoxify their potentially toxic diet.
Method
The 16S rRNA gene was used to characterise the composition and diversity of faecal bacterial communities from a wild koala population (n = 32) comprising individuals that predominately eat either one of two different food species, one the strongly preferred and relatively nutritious species Eucalyptus viminalis, the other comprising the less preferred and less digestible species Eucalyptus obliqua.
Results
Alpha diversity indices indicated consistently and significantly lower diversity and richness in koalas eating E. viminalis. Assessment of beta diversity using both weighted and unweighted UniFrac matrices indicated that diet was a strong driver of both microbial community structure, and of microbial presence/absence across the combined koala population and when assessed independently. Further, principal coordinates analysis based on both the weighted and unweighted UniFrac matrices for the combined and separated populations, also revealed a separation linked to diet. During our analysis of the OTU tables we also detected a strong association between microbial community composition and host diet. We found that the phyla Bacteroidetes and Firmicutes were co-dominant in all faecal microbiomes, with Cyanobacteria also co-dominant in some individuals; however, the E. viminalis diet produced communities dominated by the genera Parabacteroides and/or Bacteroides, whereas the E. obliqua-associated diets were dominated by unidentified genera from the family Ruminococcaceae.
Discussion
We show that diet differences, even those caused by differential consumption of the foliage of two species from the same plant genus, can profoundly affect the gut microbiome of a specialist folivorous mammal, even amongst individuals in the same population. We identify key microbiota associated with each diet type and predict functions within the microbial community based on 80 previously identified Parabacteroides and Ruminococcaceae genomes.