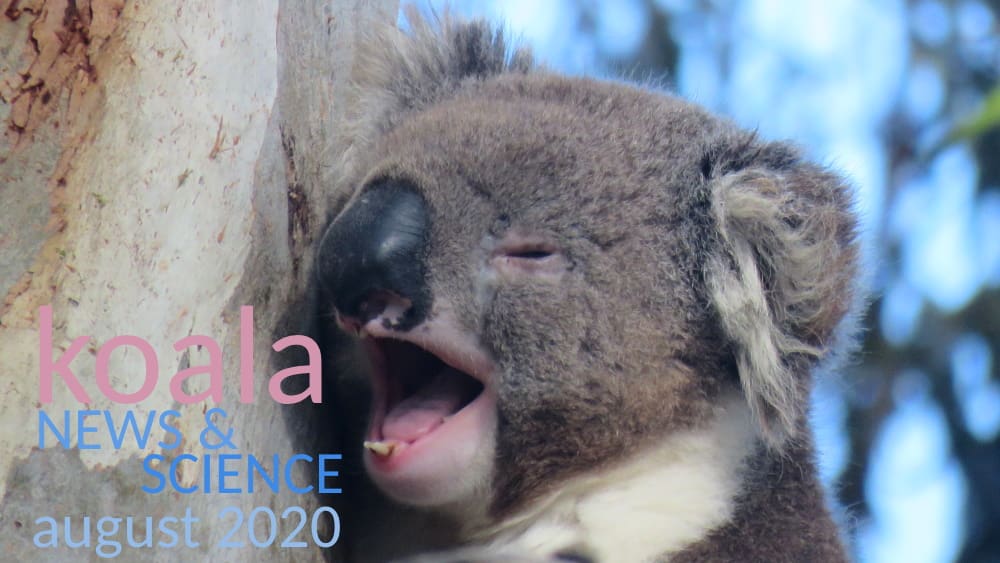 WIRES, WWF Australia & the University of Sydney are collaborating on a $1million project to install 800 koala water stations all over eastern Australia. Groups working with wild koalas on private or public land are encouraged to apply. https://www.wires.org.au/media-releases/wires-launches-water-for-wildlife-project

Mornington Peninsula Koala Conservation have launched the Coolart to Cerberus Biolink Project. Landholders in the shaded area on the map are invited to sign up to the revegetation project. https://www.mpkoalas.org.au/
https://drive.google.com/file/d/1F4Q8L68tQAzJTmdUkSS5YIab90xTQ8mf/view?usp=drivesdk

8,000+ koala trees planted near Melbourne, even during lockdown 31 August

Koala Clancy Foundation have planted 8,200 trees into damp soil on the Western Plains in the best conditions for tree growing in years. https://www.koalaclancyfoundation.org.au/about-us/

The South East Queensland Koala Conservation Strategy has been launched, with improved protection for key koala habitats. The Islander Online

NEFA (North East Forest Alliance) are pushing for a 7,000ha reserve to protect the koala population of the Richmond River lowlands. This population was thriving until the Busby’s Flat fire, and now needs a boost. Echo

After being declared locally extinct in the Pilliga Forest, koalas have been sighted again in 2020. Researchers believe that recent good rains have encouraged koalas to move out of refugia and back into the landscape. ABC Radio National

Support for ANU research into koala after bushfire 10 August

A large donation to ANU will support research into how fire affects the nutritional quality of koala forage. https://www.ausleisure.com.au/news/minderoo-foundation-funding-assists-research-into-koala-recovery-post-bushfires/

Chlamydiosis is the most significant infectious disease of koalas (Phascolarctos cinereus). It is primarily a systemic sexually transmitted disease caused by Chlamydia pecorum and was responsible for 46% of the 2348 koala admissions to Australia Zoo Wildlife Hospital between 2013 and 2017. Treatment of chlamydiosis in koalas is complicated by three major factors. Firstly, koalas rely on bacterial fermentation of their high fibre diet making antibiotic therapy a risk. Secondly, they possess efficient metabolic pathways for the excretion of plant toxins and potentially of therapeutic agents. Thirdly, wild koalas, often present to rehabilitation facilities with chronic and severe disease. Traditional anti-chlamydial antibiotics used in other species may cause fatal dysbiosis in koalas or be excreted before they can be effective. We compared five anti-chlamydial antibiotics, azithromycin, chloramphenicol, doxycycline, enrofloxacin and florfenicol, which were used to treat 86 wild koalas with chlamydiosis presented to Australia Zoo Wildlife Hospital under consistent conditions of nutrition, housing, husbandry and climate. Response to treatment was assessed by recovery from clinical signs, and clearance of detectable Chlamydia via quantitative PCR. Doxycycline was the most effective anti-chlamydial antibiotic of the five, producing a 97% cure rate, followed by chloramphenicol (81%), enrofloxacin (75%), florfenicol (66%) and azithromycin (25%). The long-acting injectable preparation of doxycycline was well tolerated by koalas when administered via the subcutaneous route, and the weekly dosing requirement is a major advantage when treating wild animals. These findings indicate that doxycycline is the current drug of choice for the treatment of chlamydiosis in koalas, with chloramphenicol being the best alternative.

Englefield, Bruce (2020) Influences on and consequences of wildlife vehicle collisions and roadkill in Australia Thesis, University of Sydney

Wildlife vehicle collisions (WVC) are an increasing global problem as human habitation and related infrastructure progressively encroaches upon wildlife habitat. They can cause human and animal death, injury and suffering, drive threatened animal species to extinction and deplete established animal populations. They require considerable financial resources to manage and can disrupt transport systems. In Australia, the responsibility for mitigating roadkill is at both a state and local council level. The presence of dead animals resulting from WVC, colloquially called roadkill in most English-speaking locations, that remain strewn across roads and verges, is distressing and unsightly. In areas reliant on tourism income this can have deleterious financial implications. The management of the consequential roadkill and injured and orphaned animals from WVC is complex. The rescue, rehabilitation, and release or euthanasia of injured and orphaned animals in Australia is managed by a mainly volunteer workforce of approximately 20,000 wildlife carers. They are self-funded within a state system of legislation, regulation and codes of practice. However, their needs and concerns are poorly understood. There are no national data on animal roadkill victims, the long-term viability of the wildlife carer system, the physical, financial and mental wellbeing of wildlife carers, the effect on conservation and animal welfare of the release of rehabilitated and handreared animals back to the wild, or the efficacy of technical innovation applied to roadkill mitigation systems. This presents a gap in the knowledge required for focussed and comprehensive decision-making on support for wildlife carer networks, roadkill mitigation measures and changes in wildlife regulations. One Welfare is an emerging term. The concept refers to animal welfare, human welfare and environmental sustainability. It serves to highlight the interconnections between animal welfare, human wellbeing and the environment, and promotes direct viii and indirect links. Roadkill can be placed in the concept of One Welfare as it affects humans, animals and the environment. The current thesis investigates these effects and the management of Australian roadkill, and injured and orphaned animals across five studies.

The long-term survival of the koala is under serious threat from multiple factors, including infectious disease agents such as Chlamydia and koala retrovirus (KoRV). KoRV is present in both exogenous and endogenous forms, depending on the geographical location of the population. In the northern half of Australia, it is present as an endogenous infection in all koalas, making a case for an urgent need to develop a therapeutic vaccine that might prevent KoRV-associated pathologies in these koalas. To this end, we determined the therapeutic effects of vaccinating koalas harbouring endogenous KoRV with a recombinant KoRV Env protein combined with a Tri-adjuvant. We found that vaccination led to a significant increase in circulating anti-KoRV IgG levels, as well as increase in neutralising antibodies. Our study also showed that post-vaccination antibodies were able to recognize epitopes on the Env protein that were unrecognised pre-vaccination, as well as resulting in an increase in the recognition of the previously recognised epitopes. The vaccine also induced antibodies that were cross-reactive against multiple KoRV-subtypes. Finally, we found a complete clearance of KoRV-A in plasma from koalas that had detectable levels of KoRV-A pre-vaccination. Similarly, there was a significant reduction in the expression of KoRV-B viral RNA levels post-vaccination. Collectively, this study showed that koalas harbouring endogenous KoRV can benefit from prophylactic vaccination against KoRV using a recombinant KoRV-A Env protein and that the mechanism of this protection might be through the boosting of natural anti-KoRV antibodies and expanding the breadth of the recognised epitopes.

1. In many countries, more resources are required for the conservation of threatened species than are made available. Australia, the home to many unique mammalian species, has been identified as one of the top seven countries worldwide with the highest biodiversity loss and lowest amount of funding dedicated to conservation. Conservation action is generally determined by what we perceive to be the most significant conservation problems; therefore, identifying potential biases in research effort is crucial for prioritising research actions for effective conservation outcomes.

2. We reviewed the published literature on the koala Phascolarctos cinereus, a vulnerable arboreal marsupial. Our aim was to assess and quantify research efforts (number of publications) and research coverage (diversity of subject areas) of koala‐related research. We then focused on the research effort of threats to identify primary threats and fields requiring further research.

3. Using a combination of key words, journal name, study title, and methods, we reviewed and categorised 714 publications to identify the focus of research efforts. We investigated subject area, geographic and temporal publication patterns, and the extent to which primary threats have been addressed.

4. We found a trend of increasing number of publications with a diversification of threat‐based studies, and identified both geographic and subject bias in research effort. Geographic bias in the volume of research indicates that the level of koala research between regions may be a response to the species’ distribution, status and impact of threats. Research areas ‘anatomy and physiology’ and ‘threats’ received comparatively more research attention than other areas. We found a research bias between threats, with ‘disease’ representing a high percentage of all threat‐based publications. Areas that have been identified but are receiving little research attention include habitat selection and use, along with the effects of habitat loss, fragmentation, and degradation.