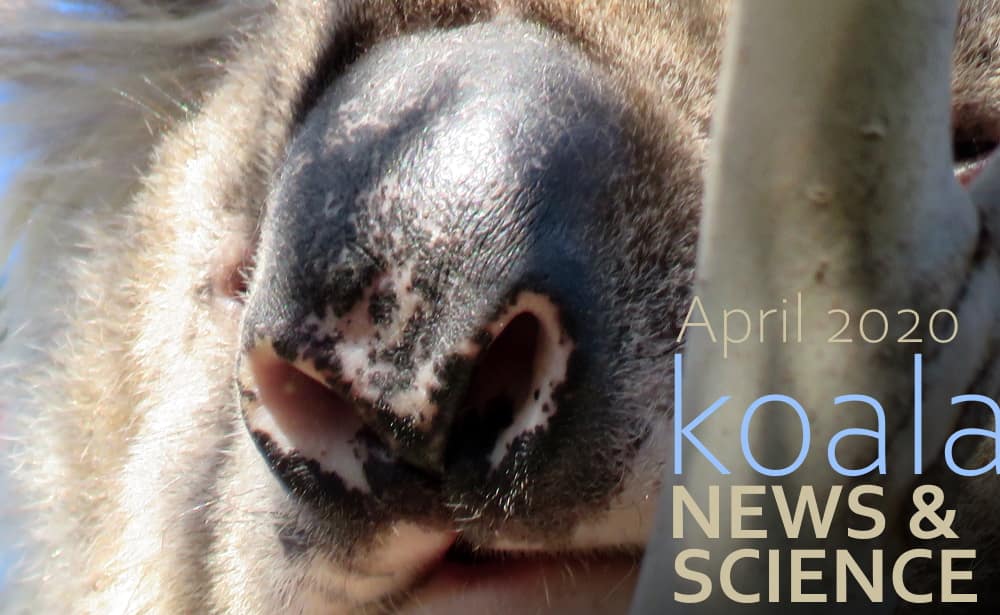 Wild Koala Day May 3 is going to be big!

Organisers are calling all to share a pic of a wild koala, wear a gum leaf and tag #wildkoaladay. The website has a list of things to do, including register to plant a tree, sign a petition to protect a forest, or phone a pollie. http://www.wildkoaladay.com.au/what-to-do/

The Koala Island Foundation will be launched on Wild Koala Day May 3. The new group will source funding & volunteers, and advocate for koalas. The Paynesville Business and Tourism Authority, Raymond Island Landcare, Koalas of Raymond Island, the Abbey and Ride the Koalas are founding members.
The story featured on Win News Gippsland  Media release

5000 trees have been planted on a single property at Binna Burra, NSW, this year. These trees join 4000 planted in 2019. Planting is ongoing around Bangalow. Facebook

The public is asked to vote on their favourite five wild animals to photograph. https://www.newbig5.com

Monitoring the cardiopulmonary signal of animals is a challenge for veterinarians in conditions when contact with a conscious animal is inconvenient, difficult, damaging, distressing or dangerous to personnel or the animal subject. In this pilot study, we demonstrate a computer vision-based system and use examples of exotic, untamed species to demonstrate this means to extract the cardiopulmonary signal. Subject animals included the following species: Giant panda (Ailuropoda melanoleuca), African lions (Panthera leo), Sumatran tiger (Panthera tigris sumatrae), koala (Phascolarctos cinereus), red kangaroo (Macropus rufus), alpaca (Vicugna pacos), little blue penguin (Eudyptula minor), Sumatran orangutan (Pongo abelii) and Hamadryas baboon (Papio hamadryas). The study was done without need for restriction, fixation, contact or disruption of the daily routine of the subjects. The pilot system extracts the signal from the abdominal-thoracic region, where cardiopulmonary activity is most likely to be visible using image sequences captured by a digital camera. The results show motion on the body surface of the subjects that is characteristic of cardiopulmonary activity and is likely to be useful to estimate physiological parameters (pulse rate and breathing rate) of animals without any physical contact. The results of the study suggest that a fully controlled study against conventional physiological monitoring equipment is ethically warranted, which may lead to a novel approach to non-contact physiological monitoring and remotely sensed health assessment of animals. The method shows promise for applications in veterinary practice, conservation and game management, animal welfare and zoological and behavioral studies.

Koalas are an iconic Australian marsupial undergoing precipitous population reduction in South-East Queensland from complex interacting threats. To investigate the causes of death and the interaction of comorbidities with demography in South-East Queensland koalas, a large scale, high-throughput prospective necropsy survey was conducted spanning 2013–2016. During this period, 519 necropsies were conducted in 155 young/subadult koalas, 235 mature, 119 old koalas and 10 of unknown age. Similar numbers of males and females were assessed. Trauma and infectious disease at were the most common single diagnoses. However, comorbidity was frequent, including multicentric infection or infectious disease in combination with trauma or senescence. Female koalas had proportionally more reproductive chlamydiosis compared to males in which the ocular and urinary systems were more commonly affected. Comorbidity and disease were strongly associated with poor body condition, and trauma was associated with good body condition. Animals affected by motor vehicle trauma were often in better body condition than those affected by animal attack, tree fall or other causes of trauma. This study identified a higher frequency of infections and comorbidity then previously reported, confirming the complex nature of interacting threats to the koala population.

Biodiversity benefits are routinely cited as an outcome of planting trees on farms but there has been too little information to properly substantiate such claims. This study is among the first to examine the use of plantings by arboreal mammals. We examined an important inland koala population and its use of farm revegetation to determine: (1) if koalas use planted trees; (2) patch characteristics correlated with use/non-use by koalas; and, (3) contextual characteristics correlated with use/non-use. Surveys of koala dung, also known as scats or faecal pellets, were conducted under trees in 19 plantings. Fourteen showed signs of koalas and their pellets were recorded under 16 of the 25 tree taxa examined. All sizes and ages of trees were used, including the youngest plantings (six years). Considerable koala activity occurred in the various Eucalyptus species, but some tree species were not used. Koalas made substantial use of inland ironbark species, which are not listed as ‘koala food trees’ in government policy documents. Proximity to potential source populations of koalas was the strongest predictor of a planting being used, but this was further improved by including the age of the planting. There is extensive public funding available for restoration and land care activities. This study demonstrates that certain trees rapidly provide koala habitat when planted on farms and that the first priority should be restoring sites in close proximity to known koala populations. Tree species used should include local recognized food trees, as well as ironbarks and non-eucalyptus species that offer shelter.