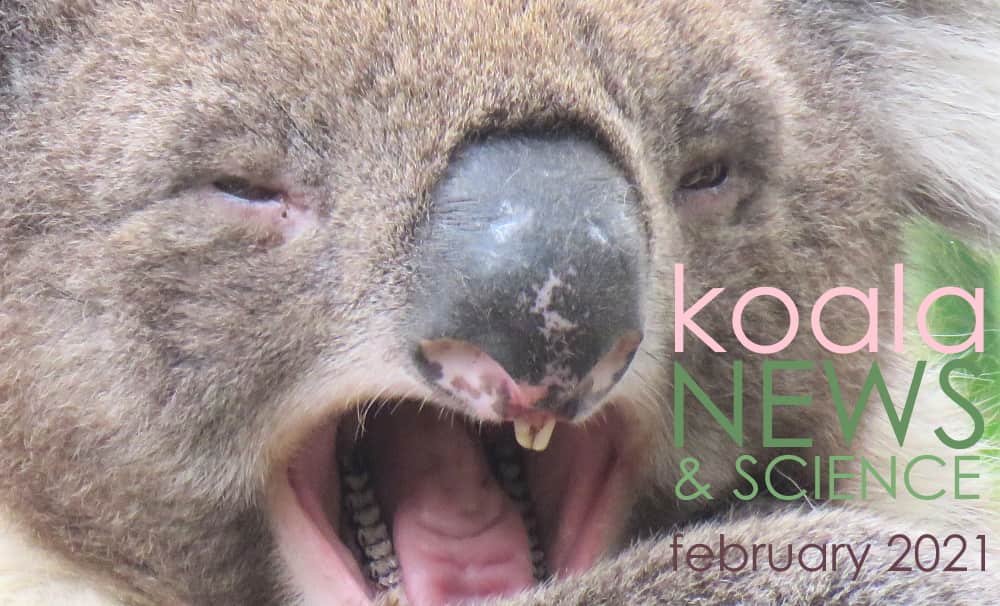 University of Newcastle study showed that the park, proposed for Mid North Coast NSW, would generate $1.2billion and $1.7billion in biodiversity value, create 9,800 new jobs and protect around 20% of the NSW koala population.
https://www.newcastle.edu.au/newsroom/featured/report-australias-first-national-park-for-koalas-projected-to-generate-$1.2-billion-in-economic-output-and-9,800-jobs?

WWF Australia announced a massive grant of $1.2million to fund the planting of 100,000 koala and rainforest trees around Bangalow/Byron Bay over 3 years.
https://snip.ly/af6gzj#https://www.northernriversreview.com.au/story/7096571/grant-plants-new-home-for-koalas/?cs=20185

Senator Sarah Hanson-Young introduced the koala bill to federal parliament, calling for a stop to all development approvals on koala habitat.
https://www.sarahhansonyoung.com/save_our_koala
https://www.miragenews.com/greens-introduce-new-laws-to-save-our-514102/

Port Macquarie-Hastings Council are planning to build new structures to encourage koalas to climb over the highway.
https://www.camdencourier.com.au/story/7129285/council-takes-another-step-in-the-fight-to-save-our-cuddly-koalas/

Charitable trust, Eucalypt Australia, are running a vote for Australia’s eucalypt of the year. The winner will be announced on National Eucalypt Day 23 March. Vote here: https://www.eucalyptaustralia.org.au/eucalyptoftheyear/

“If we can’t save koalas, can we save ourselves?”  6 February

HSI outlines what government is doing to EPBC act and why it won’t work. 19 February

Excellent HSI International blog about Prof Graeme Samuel’s recommendations for the EPBC act, and what government is planning to do with it. Also a link to take action and send a letter.
https://hsi.org.au/blog/standards-provide-no-confidence-that-devolution-will-not-be-a-disaster
https://action.hsi.org.au/page/60441/action/1

New report by OWAD Environment and WWF Australia shows the effect of large highways on the population of koalas around Port Stephens NSW.
https://www.canberratimes.com.au/story/7135429/koalas-feel-effects-of-shrinking-gene-pool/

The special issue of the science journal is open access, so everyone in the koala field can view the whole paper, and offers rapid publication for authors – beneficial for critical data that could impact a threatened species. https://www.mdpi.com/journal/animals/special_issues/health_Koalas

City of Logan have purchased 212 hectares of remnant bushland at Greenbank adjoining Cockatiel Park & Platypus Reserve, with the intention of creating an environmental reserve for koalas and other wildlife.
https://www.logan.qld.gov.au/news/article/547/logan-branches-out-to-protect-koala-habitat?newsID=547

IUCN calls for scientists and carers to stop sharing pics of themselves with their study animals. 19 January

The global conservation authority has introduced new guidelines for those working with primates – calling on them to stop sharing images that depict themselves in close contact with their charges. Studies have shown that these images fuel public misconceptions. Though these guidelines relate to primates, could the same be true for koalas?
https://www.sciencemag.org/news/2021/01/no-more-cuddly-selfies-our-ape-cousins-top-conservation-body-warns-scientists

13 koalas have been killed crossing Hogbin Drive, Coffs Harbour so Council are seeking funding to build an exclusion fence.
https://www.nbnnews.com.au/2021/02/12/coffs-council-looking-at-koala-exclusion-fencing-along-hogbin-drive/

Chlamydia is a significant pathogen for many species, including the much-loved Australian marsupial, the koala (Phascolarctos cinereus). To combat this situation, focused research has gone into the development and refinement of a chlamydial vaccine for koalas. The foundation of this process has involved characterising the immune response of koalas to both natural chlamydial infection as well as vaccination. From parallels in human and mouse research, it is well-established that an effective anti-chlamydial response will involve a balance of cell-mediated Th1 responses involving interferon-gamma (IFN-γ), humoral Th2 responses involving systemic IgG and mucosal IgA, and inflammatory Th17 responses involving interleukin 17 (IL-17) and neutrophils. Characterisation of koalas with chlamydial disease has shown increased expression within all three of these major immunological pathways and monitoring of koalas’ post-vaccination has detected further enhancements to these key pathways. These findings offer optimism that a chlamydial vaccine for wider distribution to koalas is not far off. Recent advances in marsupial genetic knowledge and general nucleic acid assay technology have moved koala immunological research a step closer to other mammalian research systems. However, koala-specific reagents to directly assay cytokine levels and cell-surface markers are still needed to progress our understanding of koala immunology.

Pulmonary actinomycosis is described in 17 South Australian koalas necropsied between 2016 and 2019. From these cases, four koalas had secondary hypertrophic osteopathy. Plain radiographical and computed tomography images demonstrated periosteal reaction on multiple appendicular skeletal bones in all cases, including scapula, humerus, ulna, radius, ilium, femur, tibia, fibula, metacarpus, metatarsus and phalanx. Grossly, periosteal surfaces of the metaphyses and diaphyses of long bones were thickened and roughened; microscopically, this was characterised by bi‐layered proliferation of well‐differentiated trabecular bony spicules oriented perpendicular to the cortex (pseudocortices) and separated by vascular connective tissue, typical for hypertrophic osteopathy. Well characterised in domestic species and rarely reported in marsupials, this is the first radiographical and pathological characterisation of hypertrophic osteopathy in koalas, associated with pulmonary actinomycosis in all cases.

Australia’s 2019–2020 ‘Black Summer’ bushfires burnt more than 8 million hectares of vegetation across the south-east of the continent, an event unprecedented in the last 200 years. Here we report the impacts of these fires on vascular plant species and communities. Using a map of the fires generated from remotely sensed hotspot data we show that, across 11 Australian bioregions, 17 major native vegetation groups were severely burnt, and up to 67–83% of globally significant rainforests and eucalypt forests and woodlands. Based on geocoded species occurrence data we estimate that >50% of known populations or ranges of 816 native vascular plant species were burnt during the fires, including more than 100 species with geographic ranges more than 500 km across. Habitat and fire response data show that most affected species are resilient to fire. However, the massive biogeographic, demographic and taxonomic breadth of impacts of the 2019–2020 fires may leave some ecosystems, particularly relictual Gondwanan rainforests, susceptible to regeneration failure and landscape-scale decline.

Historical hunting pressures on koalas in the southern part of their range in Australia have led to a marked genetic bottleneck when compared with their northern counterparts. There are a range of suspected genetic disorders such as testicular abnormalities, oxalate nephrosis and microcephaly reported at higher prevalence in these genetically restricted southern animals. This paper reports analysis of differential expression of genes from RNAseq of lymph nodes, SNPs present in genes and the fixation index (population differentiation due to genetic structure) of these SNPs from two populations, one in south east Queensland, representative of the northern genotype and one in the Mount Lofty Ranges South Australia, representative of the southern genotype. SNPs that differ between these two populations were significantly enriched in genes associated with brain diseases. Genes which were differentially expressed between the two populations included many associated with brain development or disease, and in addition a number associated with testicular development, including the androgen receptor. Finally, one of the 8 genes both differentially expressed and with a statistical difference in SNP frequency between populations was SLC26A6 (solute carrier family 26 member 6), an anion transporter that was upregulated in SA koalas and is associated with oxalate transport and calcium oxalate uroliths in humans. Together the differences in SNPs and gene expression described in this paper suggest an underlying genetic basis for several disorders commonly seen in southern Australian koalas, supporting the need for further research into the genetic basis of these conditions, and highlighting that genetic selection in managed populations may need to be considered in the future.