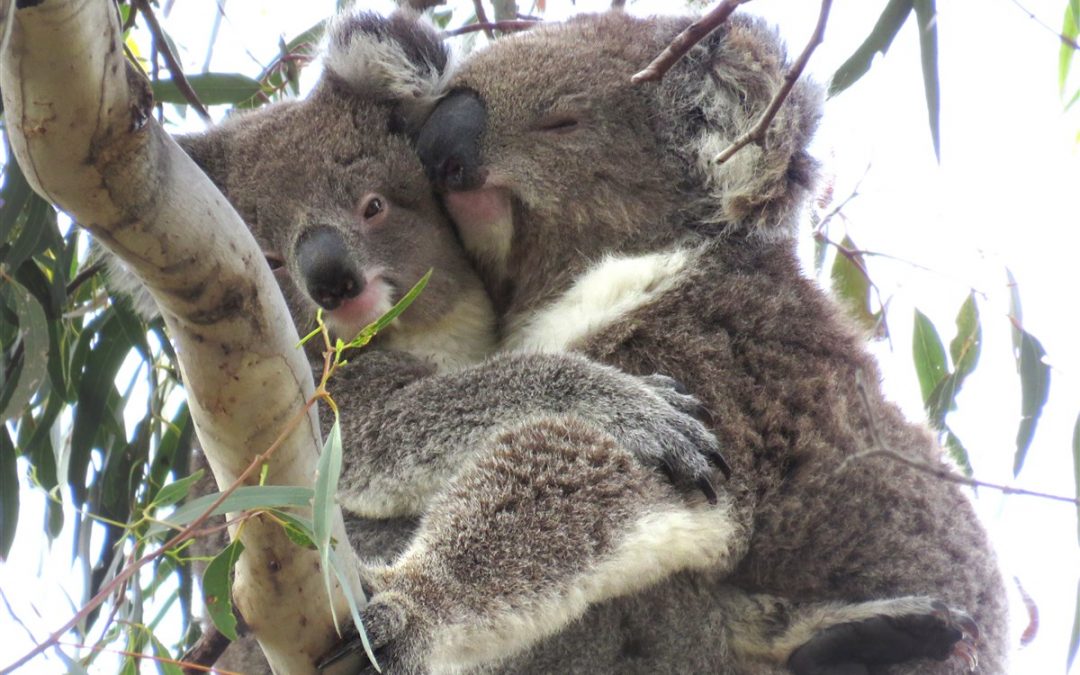 The angelic face and innocent eyes of a koala hide a mischievous sprite, with one of the most interesting sex lives in the animal kingdom, worthy of a national Wild Koala Day in their honour.

Koala expert Janine Duffy says that wild koala behaviour is extremely interesting. The fluffy marsupial is often portrayed as a living soft toy, which leads many people to underestimate them.

“Wild Koala Day on May 3 was started to show that there’s more to koalas than a cuddle,” said Ms Duffy.

“Here’s five facts to help you look at them differently,” she said.

“Under all that fluff and chubby cuteness, there’s a lot of woman!”

How: She still has a single opening to the exterior, but just inside the vagina branches into three.

Why: Its part of her marsupial heritage. The plumbing runs through the middle of the baby factory, preventing the three branches from fusing into one.
“OMG Imagine inventing a sex toy for koala girls!”

“Watching a male koala become aroused is like a scene from an alien horror movie.”

“Not only does a koala’s penis have two heads, it is pink, very large and prominently-veined.”

“Koalas are well-endowed in both girth and length.”

How: the two heads don’t stick out far and can be retracted.

Why: No-one is really sure, but maybe it helps sperm enter two of the three branches of the vagina?

“Its not a guy’s looks, wealth or power that turns on a lady koala, its his voice.”

“Barry White, Louis Armstrong and Nick Cave would have done well as koalas.”

“Male koalas broadcast their availability in breeding season – their voice travels far, and clucky females make their travel plans to the deepest voice in the land.”

How: low sounds are usually produced by large bodies, so a deep voice is an indicator of a large, strong male that will father strong offspring.

Why: Low notes travel further, so deep-voiced males have a wider audience.

“Fact #4. Koalas ovulate only after they have sex”

“Koalas are induced ovulators – an egg is released after sex.”

“Koala girls don’t have a period or a monthly oestrus cycle, they do it all in a rush once a year when sex is achieved and pregnancy is likely.”

“Imagine all that pre-menstrual tension bottled up into one insane week per year.”

“The first Drop Bear was just a pre-menstrual female koala in a bad mood.”

How: Hormones released in response to sex cause the ovary to release an egg, which is fertilised by stored sperm.

Why: It is suggested that it is good for animals with large home ranges who might have trouble finding each other at the right time.

“All year a lady koala will sit in her house as a happy single mother in her trackies, eating and playing with her kid. But then October comes around and the males start to sing to her. It awakens something. She starts to think about doing her hair and going to the gym. By December she is fit and fine and ready for the town.”

“Lady koala packs her bags and goes on a little sex holiday. She goes straight to the house of the male she wants, sets herself up in the spare room and waits. She has no fear of being rejected – koalas are born gorgeous, and they know it.”

“Male koala eventually figures out she is there and goes to her. If she likes him, she won’t fight him – much. If she doesn’t like him she becomes vicious, slashing at his face with razor sharp claws. Lady koalas are not to be messed with.”

This is why Wild Koala Day on May 3 is so important. The how and why of all this behaviour is best seen in wild koala populations.
“If we don’t act soon, we won’t have wild populations of koalas to watch.”

How to help koalas on May 3: https://koalaclancyfoundation.org.au/research/wild-koala-day.