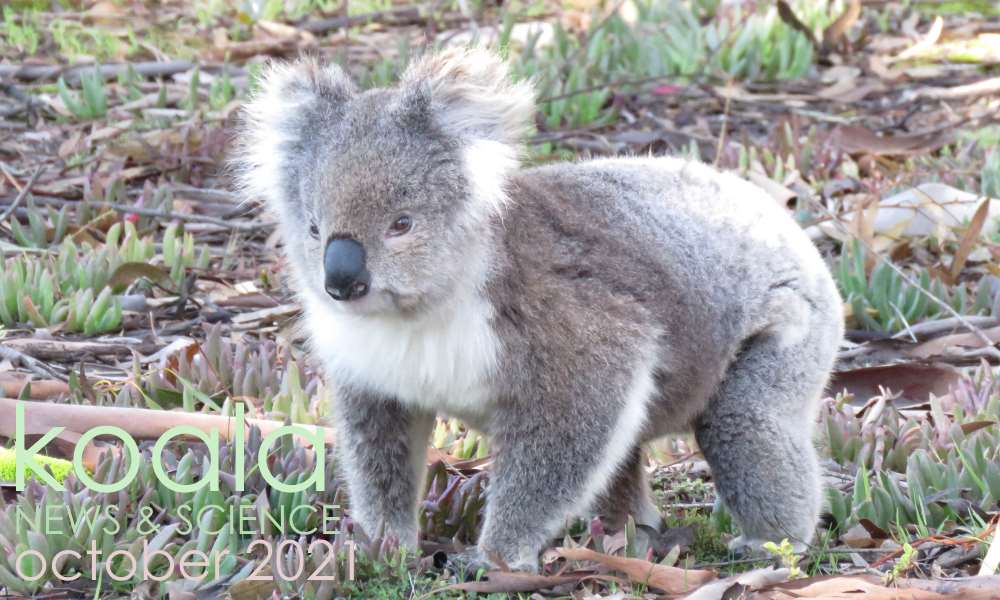 Koala genome in public domain 30 September
Scientists at the University of Sydney’s Australasian Wildlife Genomics Group have loaded the entire genomes of 116 koalas to the public domain to accelerate vital research. A total of 450 will be loaded over the next few months.
https://www.sydney.edu.au/news-opinion/news/2021/09/30/koala-genome-data-released-threatened-species-initiative-aws.html

Chlamydia vaccine trials 17 October
400 koalas will be vaccinated against chlamydia in a University of Sunshine Coast-led trial.
https://www.reuters.com/business/environment/australian-koalas-line-up-chlamydia-vaccine-new-trial-2021-10-16/

9000 trees planted for koalas at Gunnedah NSW 14 October
16 Landowners have contributed 50% of funding for planting 9000 koala trees over 45 hectares.
https://www.nbnnews.com.au/2021/10/14/gunnedahs-koala-habitats-given-a-boost/

Snowy-Monaro Koalas released after fires are doing well NSW 30 October
Researcher Murraya Lane has been tracking rehabilitated koalas released back to Peak View from May 2020, and has found them to be healthy and moving a lot.
https://www.abc.net.au/news/2021-10-30/scientists-witness-extraordinary-resilience-of-koalas/100570494

NSW Minister admits Government not doing enough 26 October
Environment Minister Matt Kean admitted to a budget estimates hearing that the NSW government should do more for koalas. He announced that a strategy is forthcoming and will be fully funded, He also said that he will be expecting LendLease and other developers to abide by the Chief Scientists recommendations.
https://www.abc.net.au/news/2021-10-26/environment-minister-matt-kean-says-nsw-not-doing-enough-koalas/100570192

FLINTpro assesses carbon capture of a koala tree plantation VIC 16 October
The 5900 trees planted on the 14 hectare site are predicted to store 710 tonnes of carbon by 2030, and 1530 tonnes in 2050. That’s roughly 1 tonne of carbon stored for every 3 trees.
https://www.koalaclancyfoundation.org.au/koala-tree-planting-reducing-carbon-emissions/

Areas removed from logging thanks to conservation group, Coffs Coast NSW 1 October
Several compartments scheduled for logging in Pine Creek State Forest have been halted, and Bongil Bongil and Bindarri national parks have been declared as Areas of Intergenerational Significance due to their koala populations. Friends of Pine Creek are proposing a forest bridge to link the 3 parks.
https://www.newsofthearea.com.au/fight-for-a-forest-bridge-by-the-friends-of-pine-creek-gathers-pace-79168

This six-year study aimed to monitor a local koala population and koala protection/mitigation measures before, during and after a major upgrade to the Pacific Highway at Lindsay’s cutting near Coffs Harbour in northern coastal New South Wales. This represents the scale of the individual koala interacting with traffic on a primary road within a well-studied Local Government Area for koalas. We also collected records of koala road injury and death from local wildlife carers. The principal findings were that, before the upgrade or any mitigation provisions, koalas were regularly killed on this 1 km stretch of highway flanked by primary koala habitat (26 records 1991-97). Koala exclusion fences largely eliminated the roadkill here, but the benefits were highly localised. Koalas made occasional use of a wildlife underpass below the highway. Two problems were identified: a farm gate left open in the fence allowed koalas onto the highway, and koalas could walk around the fence ends onto the highway. On the positive side, we have shown the value of local-scale research and mitigation, such as koala exclusion fences, and the value of examining the koala population of the surrounding area to assess the effectiveness of this mitigation at a larger scale.

Koala (Phascolarctos cinereus) is an iconic folivorous marsupial native to the sclerophyll forests and woodlands of Australia. Due to the ever-changing habitat, this species is highly vulnerable to anthropogenic factors such as habitat loss and fragmentation, and this is reflected in the increasing number of injured and/or diseased koalas over the years. The majority of adult koalas admitted at wildlife hospitals are deceased, either due to natural causes, or have to be euthanized. Thus, orphaned koala joeys constitute a substantial number of wildlife rescues, and mortality is also prevalent in koala joeys being hand-reared/rehabilitated, with little knowledge about the causes of such high rates of mortality. Wildlife hospitals/rehabilitation centres are inherently stressful, and although the hypothalamic–pituitary–adrenal (HPA) axis plays a vital role in mediating the stress endocrine function (by producing glucocorticoids such as cortisol), there are no studies quantifying glucocorticoids in koala joeys. To contribute to this dearth of research, we sampled a total of seven individuals residing at Port Macquarie Koala Hospital and noted their clinical information. Faecal samples were collected from all seven koala joeys during routine cage cleaning. In total, 123 faecal samples were collected, processed and analysed for cortisol using enzyme-immunoassay (EIA). We used the iterative baseline approach to determine baseline and peak concentrations of FCM in koala joeys. Baseline concentrations ranged between 14.11 ng/g – 51.10 ng/g (healthy – sick), whereas, peak FCM concentrations ranged between 25.65 ng/g – 56.58 ng/g (healthy – sick). There was a significant difference (p &lt; 0.05) between FCM concentrations of healthy and impaired individuals. Healthy individuals displayed relatively consistent FCM concentrations, whereas, diseased individuals displayed a significant increase in FCM concentrations over time. Our study provides the first record of baseline and peak FCM concentrations in rescued koala joeys with their associated clinical condition. Future studies can use the iterative baseline approach to determine FCM concentration in wild koala joeys that can serve as a baseline to compare glucocorticoid levels of rescued joeys.

Food quality and availability are believed to be primary determinants of habitat quality for koalas (Phascolarctos cinereus), so we need to know ‘what makes good food for koalas?’ An answer to this question must define the dietary niche of koalas, describe how much koalas eat and also consider variation in food choice by koalas at several scales. Ultimately, all these issues must be related to variation in foliar chemistry. Recent studies have shown that there is a closer relationship between leaf composition and the food preferences of koalas than had previously been appreciated but we emphasise the importance of evaluating diet selection within a theoretical framework and at appropriate temporal and spatial scales. Finally, we discuss the steps needed to incorporate an understanding of the nutritional challenges faced by koalas into a broader understanding of the species’ ecology to assist in its conservation.