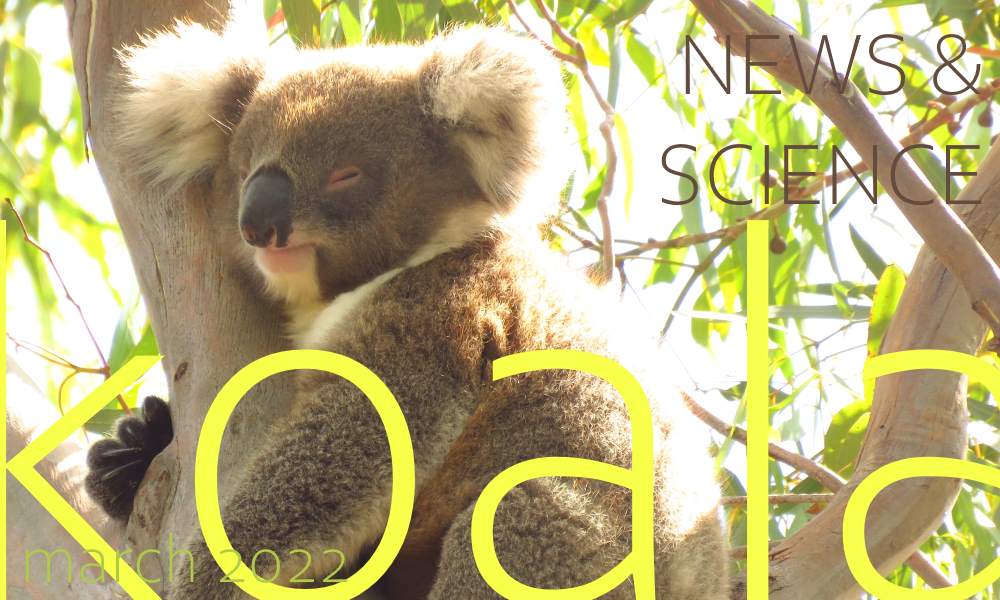 Wild Koala Day on again 3 May Australia-wide
Groups all around Australia are running events for Wild Koala Day. There’s still time to get involved. Email your event to wildkoalas@outlook.com

Koala tree plantations in northern NSW survive flooding 23 March
Some of Bangalow Koalas tree plantations have survived the north NSW flooding. Of their 9 properties affected by floods, 2 have been assessed at Tintenbar and some trees have survived. Assessments are ongoing. A flood recovery cleanup on 12-13 March was successful, with more to come thanks to funding from WWF and IFAW.
https://www.facebook.com/BangalowKoalas/posts/3097712287148157
https://mailchi.mp/fa1c4d5c34d4/bangalow-koalas-march-2022-newsletter?e=c0fcf2ee9c

After nearly 20 years, Victorian government finally drafts koala management strategy
Horribly overdue, the Victorian government has finally released their first draft koala management strategy since 2004. Full of weak aims and priorities that show koalas are still regarded as an inconvenience, it is possibly still better than having nothing.
Comment closes 3 April: https://engage.vic.gov.au/VKMS

Gunnedah koalas to receive chlamydia booster NSW 17 March
University of Sydney scientists are planning to vaccinate 50 wild koalas with a stronger dose, after disappointing results from the September 2020 vaccination.
https://www.nvi.com.au/story/7661557/gunnedah-shires-koalas-to-be-injected-with-stronger-chlamydia-vaccine/?cs=12

Linear infrastructure stands as one of the main culprits of anthropogenically caused biodiversity decline. As it fragments landscapes, it ultimately results in a myriad of direct and indirect ecological consequences for wildlife. As transportation networks will continue to grow under increasing human population growth, biodiversity will continue to decline making the need to understand and mitigate their impact on species an urgent need for conservation worldwide. The implementation of mitigation measures to alleviate the barrier effect produced by linear transport infrastructure on local fauna is not new, and research has shown that their effectiveness has been shown to be influenced by their design, their placement and the biology of the impacted species. Our understanding of their effectiveness in preventing the longer-term impacts of linear transport infrastructure on habitat connectivity via gene flow, however, remains poorly understood. Here, we used a pre- and post-habitat fragmentation genetic dataset collected as part of an extensive Koala Management Program to ask questions about the immediate and predicted longer-term genetic consequences of linear transport infrastructure on the impacted species. Importantly, using forward migration simulations, we show that to preserve connectivity would need to result in around 20% of the population mixing to avoid long-term genetic drift. These results have important consequences for the management of species at the forefront of linear infrastructure. In particular, the study shows the importance of considering gene flow in our assessment of the effectiveness of fauna crossings.

Lunney, D., Cope, H., Sonawane, I., Stalenberg, E. and Haering, R., An analysis of the long-term trends in the records of Friends of the Koala in north-east New South Wales: I. cause and fate of koalas admitted for rehabilitation (1989-2020). Pacific Conservation Biology.
https://www.publish.csiro.au/PC/justaccepted/PC22008

Context: The koala is a threatened species in NSW and long-term datasets of koala rehabilitation provide a valuable source of insight into local threats. Aims: To examine the long-term trends of the cause and fate of koalas admitted for rehabilitation to assist both monitoring the recovery of koala populations and provide a new outlook on the limitations and strengths of rehabilitation records for koala conservation. Methods: We used data from long-term records (1989-2020) of the Friends of the Koala (FoK) wildlife rehabilitation group in north-east NSW to identify spatial and temporal trends in 5,051 koala admissions. Key results: Chlamydiosis was the most common cause of admission. Admissions of female koalas with chlamydiosis showed a two-fold increase over summer, and admissions for motor vehicle collisions and unsuitable environment increased in spring. The rescue locations of admissions show an increasing geographic spread over time. Admission body scores were higher in koalas that were eventually released than in non-released koalas. Besides chlamydiosis, other diseases and motor vehicle collisions, the other main causes of admission were unsuitable environments, dog attacks, abandonment/ orphaning and attacks from other species. Conclusions: We have produced an analysis and interpretation of a long-term dataset of the relative importance of various threats facing the local koala population. However, admissions to rehabilitation do not capture all the landscape-scale problems confronting koalas locally, particularly climate change and habitat loss. Implications: We have provided the baseline necessary to detect future changes in the causes for admission, rates of rehabilitation and post-release survival.

Context: Post-release monitoring of rehabilitated koalas is lacking, meaning that the long-term success rate is unknown. Aims: We addressed the question: will a koala released from rehabilitation re-join the wild population and survive for months, if not years? Methods: Using ear tag records as unique identifiers of individual koalas, we sifted the 31-year set of 5051 koala admission records (1989-2020) of a koala rehabilitation group, Friends of the Koala, in Lismore, north-east NSW for records of koalas that had returned to rehabilitation for a second, third or fourth time. Key results: Of the 1771 koalas that were released, most (80%) had a coloured ear tag with a unique number. Of these koalas, 270 were admitted to rehabilitation two or more times and therefore represented an opportunity for post-release monitoring. Readmission figures mostly fitted the pattern of first admissions, meaning that the released koalas had become part of the local koala population. Of the 270 koalas that were readmitted into rehabilitation, 66% remained for more than 6 months in the wild, and 33% remained in the wild for more than 2 years. Conclusions: We conclude that rehabilitated and released koalas can survive in the wild long-term, even though some koalas were readmitted after a very brief period post-release. Implications: The success of rehabilitation and release, as judged by readmitted tagged koalas, is a more robust view of success for koala survival after rehabilitation than simply the proportion of released versus non-released koalas.