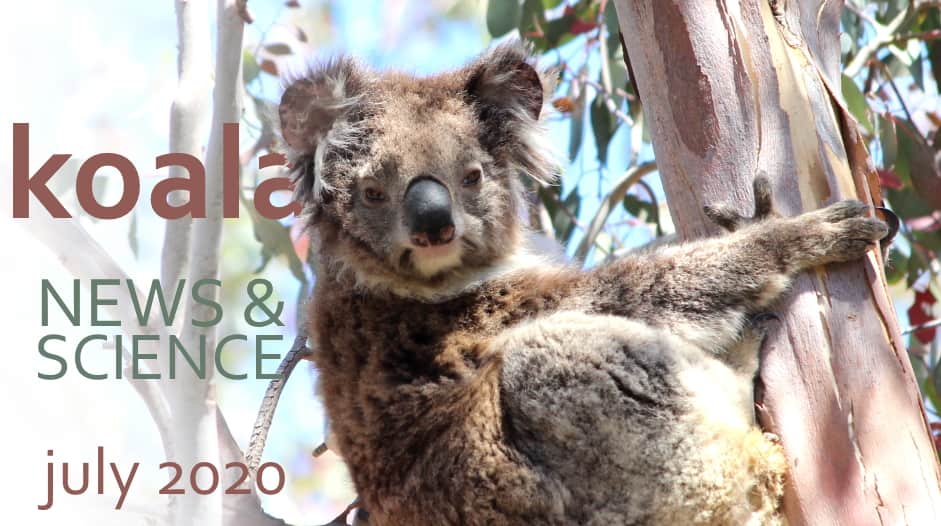 As a result of donations from the Black Summer Bushfires, WIRES have pledged a 3 year, $1 million grant that will sustain University of Sydney’s Koala Health Hub.
Sydney Uni

Mid Coast Council have produced a series of videos, including one about koalas, in collaboration with Koalas In Care.
Great Lakes Advocate

A planning proposal on a 3 ha bushland site at Bridgeman Downs, home to koalas, squirrel gliders & grey goshawk, was twice rejected by council. Developers are appealing the decision in court. Locals are calling on council to buy the land.
Brisbane Times and: ABC News

5.4km of koala corridors to be planted near Bathurst NSW 8 July

Some improvement in conditions for koalas at Gunnedah 27 June

Habitat loss and fragmentation threaten the survival of koalas in Queensland. In rural landscapes, remaining koala habitat is often in the form of scattered paddock trees, patches of vegetation and roadside vegetation. The aims of this study were to (1) quantify the use of these three habitat types; (2) determine whether there is an increased use of scattered trees during the breeding season; and (3) describe the movement characteristics (daily step-length and turning angle) of koalas in different habitat types. To do this, koalas were caught and fitted with global positioning system (GPS) loggers that recorded their daily locations. We found koalas utilised all three habitat types in both breeding and non-breeding seasons, but roadside vegetation and scattered trees were utilised significantly more than expected based on their availability within the landscape. We found no significant difference in step-length or turning angles in scattered trees compared with patches of vegetation. We conclude that scattered trees are a critical element of habitat in this rural landscape. This work provides evidence that retaining or planting scattered trees within the rural landscape would likely complement or possibly enhance the conservation value of rural landscapes for koalas.