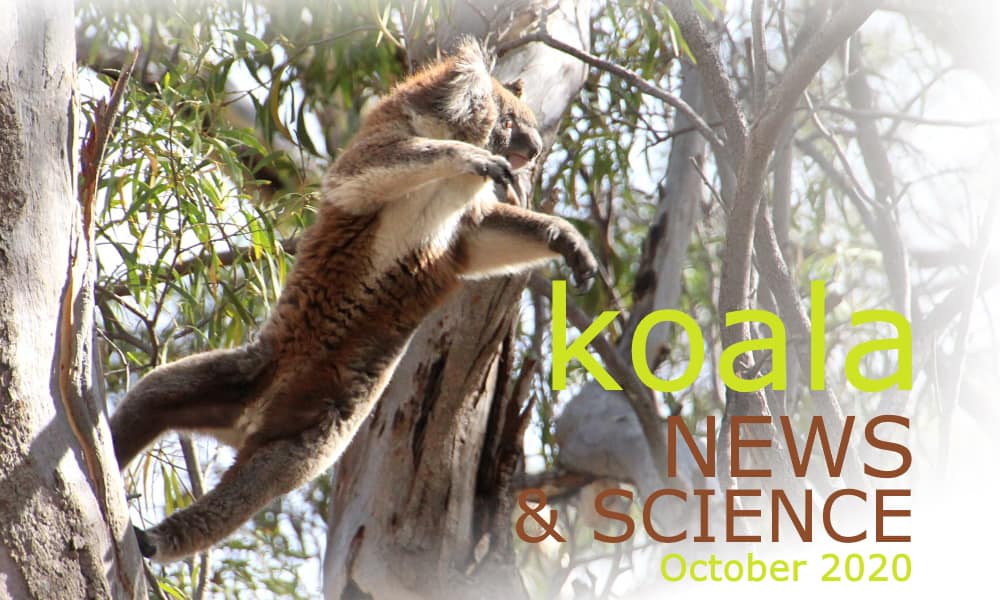 Drones are being tested and funding sought, to disperse native plant seed across fire-ravaged eastern Australia. The drones can drop 40,000 seeds a day.
https://www.reuters.com/article/australia-bushfires-wildlife-int-idUSKBN2740V2 and https://www.sbs.com.au/news/these-specialised-drones-could-help-regenerate-koala-habitat

Students at Delungra Primary School in northern NSW between Glen Innes & Moree log sightings of koalas and grow trees for the area.
https://www.abc.net.au/news/2020-10-11/school-growing-trees-save-koala-drought-bushfire/12743570

9000 trees planted for koalas along rivers near You Yangs, VIC

Koala Clancy Foundation planted over 9000 native trees & shrubs along rivers & drainage lines from June to September 2020, and planning is underway for more in 2021.
https://www.koalaclancyfoundation.org.au/9000-koala-trees-planted/

QUT researchers have secured $480,000 in funding to vaccinate koalas against chlamydia. Currumbin Wildlife Hospital will administer chlamydia vaccine to all suitable koala patients before they are released back to the wild, with an aim to vaccinate 10% of the wild koala population.
https://www.abc.net.au/news/2020-10-15/koala-vaccination-program-secures-funding/12765520

A population of koalas in northern NSW is counted annually by volunteers, using a call playback method: a recorded male koala call is played and response listened for.
https://www.newsofthearea.com.au/confessions-of-a-koala-counter-night-surveys-monitor-koala-population-in-bongil-bongil-national-park-59882

Trees For Koalas – Connecting Communities project launched with a planting at Binna Burra. The project is the initiative of Mullumbimby High School SRC and has support from Byron Shire Council & DPIE. https://www.miragenews.com/mullumbimby-high-students-kick-off-koala-tree-planting-project/

Global performing art group took to the streets of Macarthur, Sydney in red robes to highlight the plight of koalas. https://www.wollondillyadvertiser.com.au/story/6964419/global-activist-group-visits-macarthur-to-highlight-koala-plight/?cs=1552

The koala (Phascolarctos cinereus) is currently listed by both the IUCN and the Australian Governments’ Threatened Species Scientific Committee as vulnerable to extinction with an overall decreasing population trend. It is unknown exactly how many koalas remain in the wild, but it is known that habitat fragmentation and bushfires have ultimately contributed to the decline of the koala all over Australia. This novel study is a retrospective analysis of data over a 29-year period (1989–2018) using records for 12,543 sightings and clinical care admissions for wild koalas from the major koala hot-spots (Port Stephens, port Macquarie and Lismore) in New South Wales, Australia. This study aims to understand the long-term patterns and trends of key stressors that are contributing to the decline of koalas in New South Wales, and the synergic interactions of factors such as rescue location, sex and age of the koala, and if their decline is influenced progressively by year. The main findings of this retrospective analysis indicated that between all 3 rescue sites, the most common prognosis was disease, the most common disease was signs of chlamydia, and the most common outcome was release. The location where the highest number of koalas were found prior to being reported as sighted or admitted into clinical care was within the regional area of Lismore. Furthermore, sex was not a discriminating factor when it came to prognosis or outcome, but age was significant. Finally, incidents of disease were found to increase over long-term, whereas release decreased over time and euthanasia increased. The wealth of data available to us and the retrospective analysis enabled us in a way to ‘zoom out’ and reveal how the key environmental stressors have fluctuated spatially and temporally. In conclusion, our data provides strong evidence of added pressures of increased human population growth in metropolitan zones, which increases risks of acute environmental trauma and proximate stressors such as vehicle collisions and dog-attacks as well as increased sightings of virtually healthy koalas found in exposed environments. Thus our ‘zoom out’ approach provides support that there is an urgent need to strengthen on-ground management, bushfire control regimes, environmental planning and governmental policy actions that should hopefully reduce the proximate environmental stressors in a step wise approach. This will ensure that in the next decade (beyond 2020), NSW koalas will hopefully start to show reversed trends and patterns in exposure to environmental trauma and disease, and population numbers will return towards recovery and stability.

Koalas (Phascolarctos cinereus) are highly specialized herbivorous marsupials that feed almost exclusively on Eucalyptus leaves, which are known to contain varying concentrations of many different toxic chemical compounds. The literature suggests that Lonepinella koalarum, a bacterium in the Pasteurellaceae family, can break down some of these toxic chemical compounds. Furthermore, in a previous study, we identified L. koalarum as the most predictive taxon of koala survival during antibiotic treatment. Therefore, we believe that this bacterium may be important for koala health. Here, we isolated a strain of L. koalarum from a healthy koala female and sequenced its genome using a combination of short-read and long-read sequencing. We placed the genome assembly into a phylogenetic tree based on 120 genome markers using the Genome Taxonomy Database (GTDB), which currently does not include any L. koalarum assemblies. Our genome assembly fell in the middle of a group of Haemophilus, Pasteurella and Basfia species. According to average nucleotide identity and a 16S rRNA gene tree, the closest relative of our isolate is L. koalarum strain Y17189. Then, we annotated the gene sequences and compared them to 55 closely related, publicly available genomes. Several genes that are known to be involved in carbohydrate metabolism could exclusively be found in L. koalarum relative to the other taxa in the pangenome, including glycoside hydrolase families GH2, GH31, GH32, GH43 and GH77. Among the predicted genes of L. koalarum were 79 candidates putatively involved in the degradation of plant secondary metabolites. Additionally, several genes coding for amino acid variants were found that had been shown to confer antibiotic resistance in other bacterial species against pulvomycin, beta-lactam antibiotics and the antibiotic efflux pump KpnH. In summary, this genetic characterization allows us to build hypotheses to explore the potentially beneficial role that L. koalarum might play in the koala intestinal microbiome. Characterizing and understanding beneficial symbionts at the whole genome level is important for the development of anti- and probiotic treatments for koalas, a highly threatened species due to habitat loss, wildfires, and high prevalence of Chlamydia infections.

Characterizing the allelic diversity within major histocompatibility complex (MHC) genes is an important way of determining the potential genetic resilience of a population to infectious and ecological pressures. For the koala (Phascolarctos cinereus), endemic diseases, anthropogenic factors and climate change are all placing increased pressure on this vulnerable marsupial. To increase the ability of researchers to study MHC genetics in koalas, this study developed and tested a high-throughput immunogenetic profiling methodology for targeting MHC class I UA and UC genes and MHC class II DAB, DBB, DCB and DMB genes in a population of 82 captive koalas. This approach was validated by comparing the determined allelic profiles from 36 koala family units (18 dam-sire-joey units and 18 parent-joey pairs), finding 96% overall congruence within family profiles. Cancers are a significant cause of morbidity in koalas and the risk factors remain undetermined. Our analysis of this captive population revealed several novel MHC alleles, including a potential link between the DBB*03 allele and a risk of developing cancer. This method offers a reliable, high-throughput protocol for expanded study into koala immunogenetics.

Identifying and conserving faunal habitat on private lands has been conducted largely on a site‐by‐site basis as development proposals arise. We sought to map koala habitat at a scale suitable for use by a local planning authority so that habitat remnants could be protected and managed while remaining in private ownership. At this scale, the level of detail and accuracy needed by local planners required a new approach to mapping koala habitat. Two independent techniques, community and field surveys, were employed. We mailed a survey to every household in Coffs Harbour shire. Respondents told of 3309 koala sightings. We conducted a field survey, a plot‐based scat (fecal pellet) search, to determine which vegetation types and tree species were preferred by koalas. We surveyed 119 sites, which contained 42 different vegetation types. Of these, 37 (31%) had been used by koalas. The outcomes of the community and field surveys were combined to produce a distribution map of koala habitat. The most striking outcome has been the use of our results by the local government authority, Coffs Harbour City Council: planners have incorporated the koala habitat map into their local environmental plan. Our procedure offers a rigorous, repeatable, and publicly accessible method for identifying and mapping important habitat for the purposes of land‐use planning, an essential procedure for conserving habitat outside the reserve system.