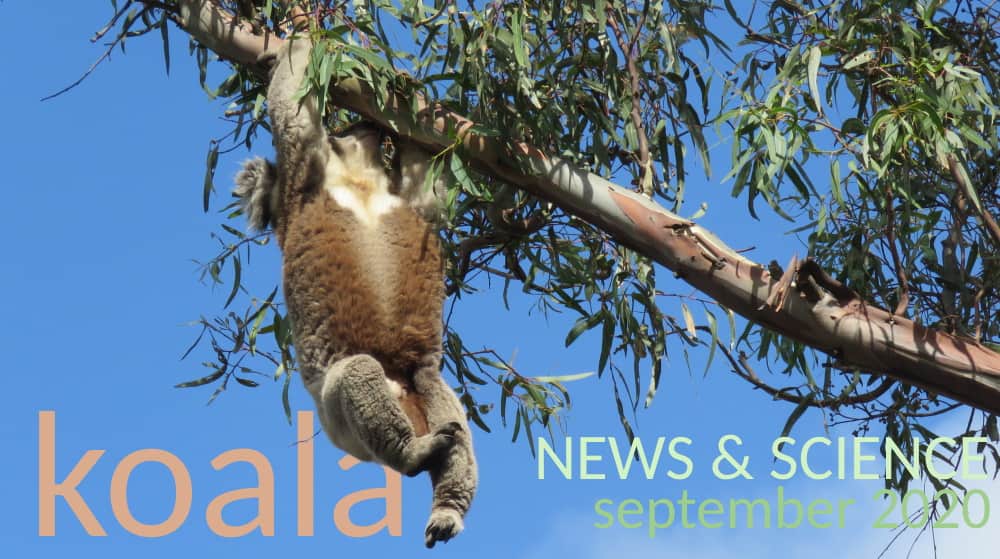 The week koala wars broke out in Australia 10 Sept

25 million trees to be planted in Australia 21 Sept

Pharmaceutical company AstraZeneca has pledged to fund the planting of 50 million trees worldwide to reach net zero carbon emissions by 2025. Due to the Black Summer bushfire wildlife crisis, half of those trees are being planted in Australia, by Greening Australia.
https://www.smh.com.au/environment/conservation/australia-to-get-25-million-trees-to-help-recover-from-last-summer-s-bushfires-20200921-p55xtm.html

28 species, including the koala, are being considered for federal uplisting of their threat status, due to presssure from IFAW, Humane Society International & WWF.
https://www.theguardian.com/environment/2020/sep/25/sliding-towards-extinction-koala-may-be-given-endangered-listing-as-numbers-plummet?CMP=share_btn_fb

University of Queensland researcher Alex Jiang has created a remote control koala to test whether cattle are more likely to trample koalas.
https://www.theguardian.com/australia-news/video/2020/sep/25/meet-kokonut-the-remote-control-koala-probing-if-cows-are-trampling-an-australian-icon-video

A female koala found in urban centre of Wauchope is now in care, and Port Macquarie Koala Hospital are reaching out to community to find out where she came from.
https://www.wauchopegazette.com.au/story/6930973/information-wanted-about-koalas-path-to-unusual-destination/

Context: Precise and accurate estimates of animal numbers are often essential for population and epidemiological models, as well as for guidance for population management and conservation. This is particularly true for threatened species in landscapes facing multiple threats. Estimates can be derived by different methods, but the question remains as to whether these estimates are comparable.
Aims: We compared three methods to estimate population numbers, namely, distance sampling, mark–recapture analysis, and home-range overlap analysis, for a population of the iconic threatened species, the koala (Phascolarctos cinereus). This population occupies a heavily fragmented forest and woodland habitat on the Liverpool Plains, north-western New South Wales, Australia, on a mosaic of agricultural and mining lands.
Key results: All three methods produced similar estimates, with overlapping confidence intervals. Distance sampling required less expertise and time and had less impact on animals, but also had less precision; however, future estimates using the method could be improved by increasing both the number and expertise of the observers.
Conclusions: When less intrusive methods are preferred, or fewer specialised practitioners are available, we recommend distance sampling to obtain reliable estimates of koala numbers. Although its precision is lower with a low number of sightings, it does produce estimates of numbers similar to those from the other methods. However, combining multiple methods can be useful when other material (genetic, health and demographic) is also needed, or when decisions based on estimates are for high-profile threatened species requiring greater confidence. We recommend that all estimates of population numbers, and their precision or variation, be recorded and reported so that future studies can use them as prior information, increasing the precision of future surveys through Bayesian analyses.

Chlamydial disease control is increasingly utilised as a management tool to stabilise declining koala populations, and yet we have a limited understanding of the factors that contribute to disease progression. To examine the impact of host and pathogen genetics, we selected two geographically separated south east Queensland koala populations, differentially affected by chlamydial disease, and analysed koala major histocompatibility complex (MHC) genes, circulating strains of Chlamydia pecorum and koala retrovirus (KoRV) subtypes in longitudinally sampled, well-defined clinical groups. We found that koala immunogenetics and chlamydial genotypes differed between the populations. Disease progression was associated with specific MHC alleles, and we identified two putative susceptibility (DCb 03, DBb 04) and protective (DAb 10, UC 01:01) variants. Chlamydial genotypes belonging to both Multi-Locus Sequence Typing sequence type (ST) 69 and ompA genotype F were associated with disease progression, whereas ST 281 was associated with the absence of disease. We also detected different ompA genotypes, but not different STs, when long-term infections were monitored over time. By comparison, KoRV profiles were not significantly associated with disease progression. These findings suggest that chlamydial genotypes vary in pathogenicity and that koala immunogenetics and chlamydial strains are more directly involved in disease progression than KoRV subtypes.

Animal-based experiences are a significant feature of the attractions profile of many tourist destinations. The koala is an iconic species that plays an important role in Australian tourism, both symbolically and materially. Due to the species being endemic to Australia and its human baby-like qualities together with numerous and long-standing representations in popular culture, the koala has become an integral component of Australia’s destination identity and subsequently deployed by government and industry bodies to promote Australia as an international tourist destination. The koala continues to play a major role in a variety of tourist experiences, with captive presentations the predominant form of contemporary koala-based tourism. Drawing on Beardsworth and Bryman’s (2001) four modes of engagement with wild animals and utilising a historical and socio-cultural analytical approach, the paper examines the involvement of the koala in tourism through (i) representation via texts and images, (ii) presentation through captive exhibits, (iii) quasification through museum exhibits, souvenirs and koala sculpture trails and (iv) encounters in the wild. Anthropomorphic renderings of the koala appear to have been important in the construction of the koala as a tourist attraction as well as in its continued symbolic and material involvement in tourism.

Context: Global climate change will lead to increased climate variability, including more frequent drought and heatwaves, in many areas of the world. This will affect the distribution and numbers of wildlife populations. In south-west Queensland, anecdotal reports indicated that a low density but significant koala population had been impacted by drought from 2001–2009, in accord with the predicted effects of climate change.
Aims: The study aimed to compare koala distribution and numbers in south-west Queensland in 2009 with pre-drought estimates from 1995–1997.
Methods: Community surveys and faecal pellet surveys were used to assess koala distribution. Population densities were estimated using the Faecal Standing Crop Method. From these densities, koala abundance in 10 habitat units was interpolated across the study region. Bootstrapping was used to estimate standard error. Climate data and land clearing were examined as possible explanations for changes in koala distribution and numbers between the two time periods.
Key results: Although there was only a minor change in distribution, there was an 80% decline in koala numbers across the study region, from a mean population of 59 000 in 1995 to 11 600 in 2009. Most summers between 2002 and 2007 were hotter and drier than average. Vegetation clearance was greatest in the eastern third of the study region, with the majority of clearing being in mixed eucalypt/acacia ecosystems and vegetation on elevated residuals.
Conclusions: Changes in the area of occupancy and numbers of koalas allowed us to conclude that drought significantly reduced koala populations and that they contracted to critical riparian habitats. Land clearing in the eastern part of the region may reduce the ability of koalas to move between habitats.
Implications: The increase in hotter and drier conditions expected with climate change will adversely affect koala populations in south-west Queensland and may be similar in other wildlife species in arid and semiarid regions. The effect of climate change on trailing edge populations may interact with habitat loss and fragmentation to increase extinction risks. Monitoring wildlife population dynamics at the margins of their geographic ranges will help to manage the impacts of climate change.