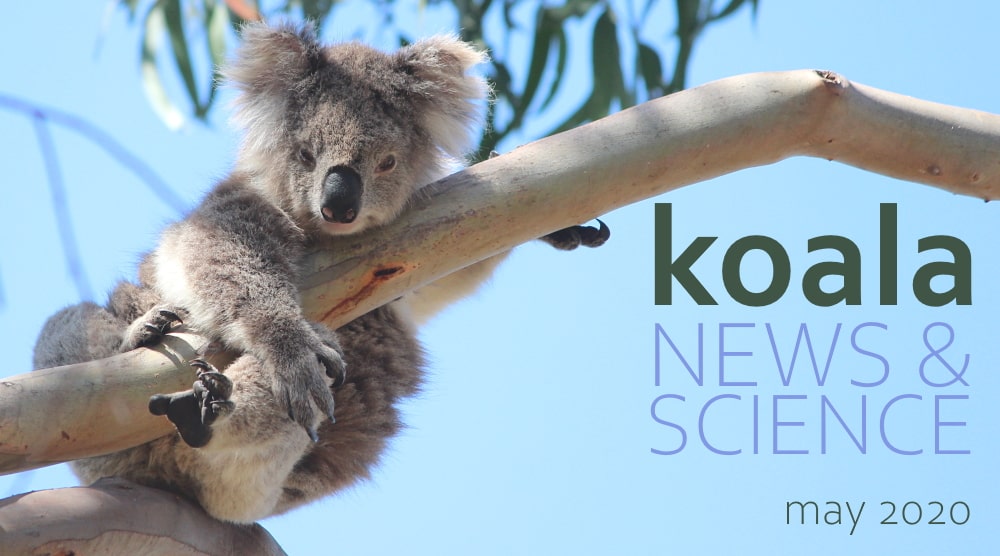 Science For Wildlife have begun a new tracking program to monitor the survival of bushfire-impacted koalas in their native habitat. SBS News

Tree Trunks Take A Licking As Koalas Source Water 3 May

Koalas Rely On Trees For Water 3 May

The distribution of the koala in Queensland is predicted to contract as a result of climate change, driven by the frequency, intensity and duration of heatwaves and drought. However, little is known about the physiological responses of this species to environmental extremes under field conditions. This study aimed to establish the efficacy of surgically implanted thermal radio transmitters and data loggers to measure the body temperature of free-ranging koalas across a range of environmental conditions and ambient temperatures. Five free-ranging koalas in southeast Queensland were implanted with thermal transmitters and data loggers waxed together as a single package. Body temperatures were recorded for variable periods ranging from 3 to 12 months. Diurnal rhythms in body temperature were detected irrespective of season. The long-term diurnal body temperature peak for all koalas occurred between 16:00 and 17:00 h and body temperature was 36.7–36.9 °C, the long-term nadir occurred between 07:00 and 08:00 h and body temperature was 35.4–35.7 °C. Koala body temperatures as low as 34.2 °C and as high as 39.0 °C were recorded. Thermolability became apparent when ambient temperatures were outside the deduced thermal neutral zone for koalas (14.5–24.5 °C): heat was accumulated during the day and dissipated during the cool of the night. While this study is the first to report on body temperature of free-ranging koalas in their normal behavioural context, further investigations are necessary to determine the physiological boundaries of the thermal niche for this species, in order to better equip models that will more accurately predict the impacts of climate change on koalas.

Urbanisation is increasing throughout the range of the koala (Phascolarctos cinereus) and has contributed to the decline of koala populations in many areas. In urban landscapes where koalas may need to travel considerable distances to access resources, they face increased risks of predation by domestic dogs and vehicular collision. Understanding how koalas navigate this risky landscape is key to developing effective conservation strategies. We used GPS data collected from 20 koalas to examine koala habitat use and movements in an urbanised area of the Mornington Peninsula, Victoria, Australia. Koala home ranges were large (males = 9.1 ha, females = 4.3 ha) and covered up to 153 properties. Analysis of GPS tracks showed that koalas moved frequently (median number of different locations per week: 14 [males], 8 [females]), usually over short distances (median distance: 69 m [males], 50 m [females]), and often crossed roads (average crossings per week: 9.4 [males], 2.7 [females]). Despite this movement behaviour placing koalas at risk of vehicular collision and predation by dogs, we recorded only three deaths during the one-year study period; two were due to old age and one of unknown cause. Our low mortality rate may be due to movements occurring at night when risks may be lower, and high awareness in the community about koalas that mitigates threats. Our results suggest that effective conservation of urban populations of koalas requires a landscape-scale approach with participation by the community and public land managers to maintain and establish koala habitat and connectivity, and to encourage koala-friendly driving behaviour.

Koalas are thought to have little need to drink because they gain the majority of the water that they require to survive from the water content in the leaves that they feed on. In this manuscript, we expand beyond the handful of incidental observations of koala drinking reported in the literature and describe natural koala drinking behaviour in the wild at different locations in Australia and across a range of weather conditions, discussing how koalas may have stronger reliance on free water than previously thought.

Context: The impacts of climate change on the climate envelopes, and hence, distributions of species, are of ongoing concern for biodiversity worldwide. Knowing where climate refuge habitats will occur in the future is essential to conservation planning. The koala (Phascolarctos cinereus) is recognised by the International Union for Conservation of Nature (IUCN) as a species highly vulnerable to climate change. However, the impact of climate change on its distribution is poorly understood.

Aims: We aimed to predict the likely shifts in the climate envelope of the koala throughout its natural distribution under various climate change scenarios and identify potential future climate refugia.

Conclusions: Under a future hotter and drier climate, current koala distributions, based on their climate envelope, will likely contract eastwards and southwards to many regions where koala populations are declining due to additional threats of high human population densities and ongoing pressures from habitat loss, dog attacks and vehicle collisions. In arid and semi-arid regions such as the Mulgalands of south-western Queensland, climate change is likely to compound the impacts of habitat loss, resulting in significant contractions in the distribution of this species.

Implications: Climate change pressures will likely change priorities for allocating conservation efforts for many species. Conservation planning needs to identify areas that will provide climatically suitable habitat for a species in a changing climate. In the case of the koala, inland habitats are likely to become climatically unsuitable, increasing the need to protect and restore the more mesic habitats, which are under threat from urbanisation. National and regional koala conservation policies need to anticipate these changes and synergistic threats. Therefore, a proactive approach to conservation planning is necessary to protect the koala and other species that depend on eucalypt forests.