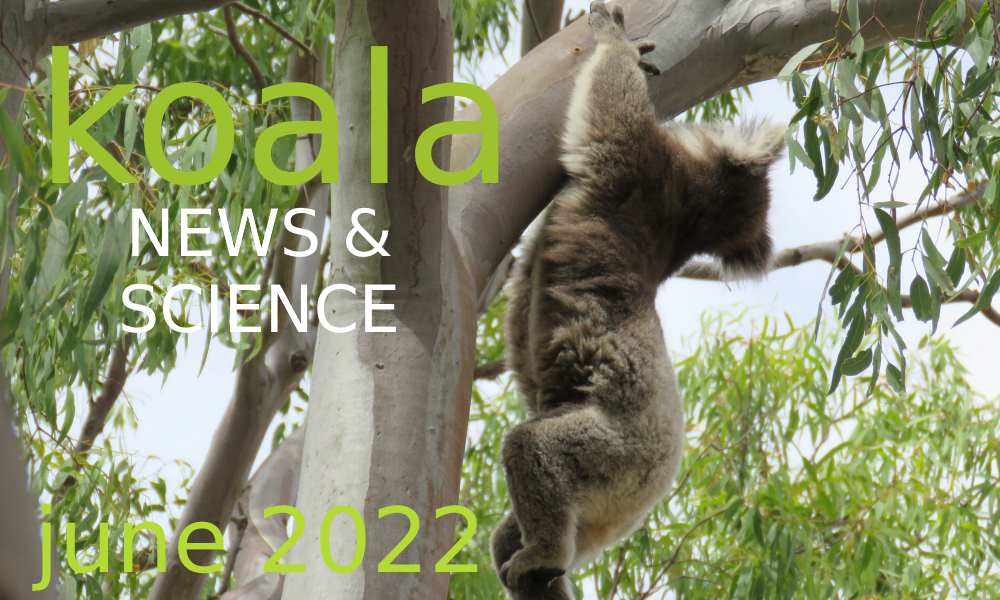 EDO summarises legal changes to status of koala in NSW 27 June
This excellent summary summarises the changes to the koala’s status in NSW as a result of the recent endangered listing. Of particular interest, it has little to no implications for forestry or land clearing. The EDO provides recommendations.
https://www.edo.org.au/2022/06/27/nsw-follows-suit-and-lists-koalas-as-endangered/

No excuses for driving 47 native animals to extinction 25 May
A distinguished group of Australian scientists have reported that 47 Australian species at imminent risk of extinction could be saved, with affordable, fairly small actions. We know why they are threatened and we know how to protect them. Though koalas are not on the list, 18 of the species listed share habitat with koalas.
https://www.theguardian.com/environment/2022/may/25/no-excuses-limited-conservation-efforts-could-save-at-least-47-australian-animals-from-extinction?CMP=share_btn_tw

Tree planting for koalas on private land in NSW 2 June
Great Eastern Ranges & WWF are leading a project to plant 150,000 koala habitat trees across NSW on private properties at strategic locations that will link pockets of existing habitat.
https://www.abc.net.au/news/2022-06-02/koala-survival-boosted-with-tree-plantings-habitat-highways/101116650

New childrens book about poo and spew 30 May
Authors Dr Romane Cristecu (famous for her work with koalas) & Nic Gill have launched “Poo, Spew And Other Gross Things Animals Do”.
https://www.australiangeographic.com.au/explorers/2022/05/poo-and-spew/

Good koala numbers in Yurol-Ringtail, Noosa NSW 28 May
34 koalas have been found by drone surveys in a sample of Yurol-Ringtail Conservation area, leading the researchers believing that there is a significant koala population in the new addition to the National Park estate.
https://noosatoday.com.au/news/28-05-2022/behind-the-last-green-link/

‘Queensland Great’ Award for Koala Scientist 25 June
Prof Peter Timms, microbiology researcher at University of Sunshine Coast has been named a Queensland Great by the state government of Queensland. The award recognises people who have made a long term contribution to or significantly impacted the history and development of Queensland.
https://www.qld.gov.au/about/events-awards-honours/awards/qld-greats-awards/2022-queensland-greats-recipients
https://gympietoday.com.au/news/2022/06/25/award-for-gympie-koala-saviour/

32,000 Koala trees for Inverleigh, VIC 30 June
The huge 3 year project on a private farm adjacent to the Inverleigh Nature Reserve will effectively double the koala habitat in an area that has lost 87% of its original woodland.
https://timesnewsgroup.com.au/goldenplains/news/koala-group-expands-efforts/

This study examined brain/body ontogenetic growth in marsupials and compared it with placental mammals. While marsupials display morphology and cerebral organization diverse from placentals, their neocortical arrangement and cellular composition is unclear. Unfortunately, knowledge of marsupial ontogenetic brain/body size allometry is limited. Since marsupial brain structure and volume differ when compared with those of placentals, marsupials are considered to possess simple behavioural patterns. This is misleading, since even at a basic observation, Australian marsupials display many of the same mental capacities as other mammals. Consequently, the study findings support further investigation into the intellectual abilities of marsupials.

Retroviruses have left their legacy in host genomes over millions of years as endogenous retroviruses (ERVs), and their structure, diversity, and prevalence provide insights into the historical dynamics of retrovirus–host interactions. In bioinformatic analyses of koala (Phascolarctos cinereus) whole-genome sequences, we identify a recently expanded ERV lineage (phaCin-β) that is related to the New World squirrel monkey retrovirus. This ERV expansion shares many parallels with the ongoing koala retrovirus (KoRV) invasion of the koala genome, including highly similar and mostly intact sequences, and polymorphic ERV loci in the sampled koala population. The recent phaCin-β ERV colonization of the koala genome appears to predate the current KoRV invasion, but polymorphic ERVs and divergence comparisons between these two lineages predict a currently uncharacterized, possibly still extant, phaCin-β retrovirus. The genomics approach to ERV-guided discovery of novel retroviruses in host species provides a strong incentive to search for phaCin-β retroviruses in the Australasian fauna.

Multiyear investigations of population dynamics are fundamental to threatened species conservation. We used multiseason occupancy based on spotlight surveys to investigate dynamic occupancy of the koala and the greater glider over an 8-year period that encompassed a severe drought in year 6. We combined our occupancy estimates with literature estimates of density to estimate the population sizes of these species within the focal conservation reserve. Both species showed substantial yearly variation in the probability of detection (koala: 0.13–0.24; greater glider: 0.12–0.36). Detection of the koala did not follow any obvious pattern. Low detection of the greater glider coincided with the drought and two subsequent years. We suggest the low detection reflected a decline in abundance. The probability of occupancy of the koala was estimated to be 0.88 (95% CI: 0.75–1.0) in year 8. Autonomous recording units were also used in year 8, enabling an independent occupancy estimate of 0.80 (0.64–0.90). We found no evidence of a drought-induced decline in the koala. Habitat variables had a weak influence on koala occupancy probabilities. The probability of occupancy of the greater glider changed little over time, from 0.52 (95% CI: 0.24–0.81) to 0.63 (0.42–0.85) in year 8. Modeling suggested that the probability of colonization was positively influenced by the percentage cover of rainforest. Increased cover of these nonbrowse trees may reflect thermal buffering, site productivity, or soil moisture. We estimate that our study reserve is likely to contain >900 adult koalas and >2400 adult greater gliders. These are among some of the first reserve-wide estimates for these species. Our study reserve can play an important role in the conservation of both species.