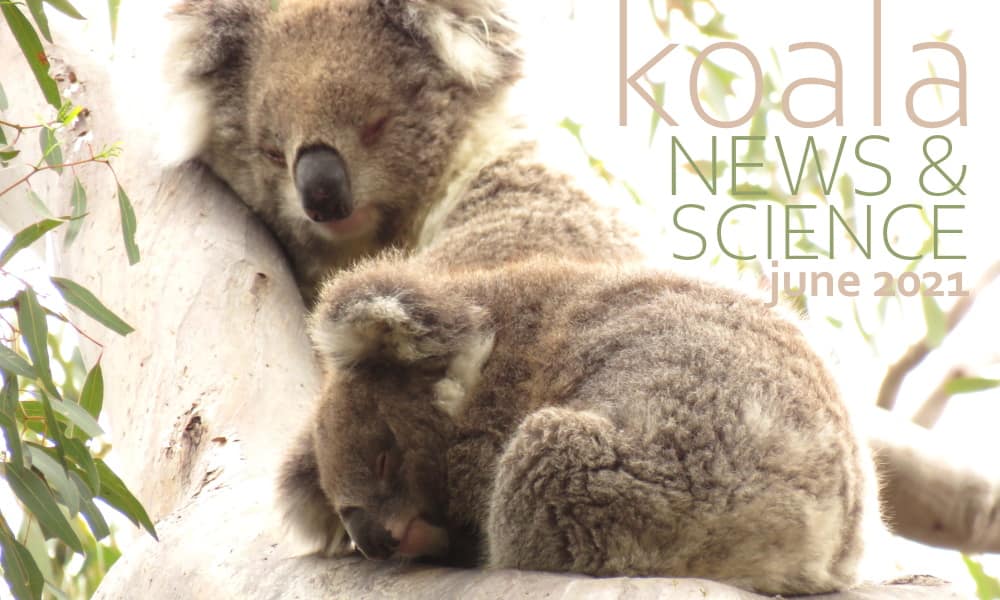 NSW Government asked for more detail on koala plan 23 June
The NSW Government’s proposed $200 million to double koala numbers in that state has been criticised for lack of detail.
https://www.abc.net.au/news/2021-06-23/koala-funding-questioned-over-lack-of-strategy/100236712

French Beauty Company supports koalas 4 June
In 2020, L’Occitane donated $228,000 to Foundation for National Parks & Wildlife, and has made further donations to support the new koala tree nursery setup by the Friends Of The Koala in Lismore NSW in 2021.
https://www.marieclaire.com.au/loccitane-koalas

Byron Shire Council rejected development on koala habitat, but developer takes it to appeal. 23 June
The Land & Environment Court is hearing the case, and Commissioner has asked for more information. The ruling is likely to depend on whether the land is considered core koala habitat.
https://www.abc.net.au/news/2021-06-23/koala-habitat-west-byron-land-environment-court-hearing/100233962

The diets of individual animals within populations can differ, but few studies determine whether this is due to fundamental differences in preferences or capacities to eat specific foods, or to external influences such as dominance hierarchies or spatial variation in food availability. The distinction is important because different drivers of dietary specialisation are likely to have different impacts on the way in which animal populations respond to, for example, habitat modification. We used a captive feeding study to investigate the mechanisms driving individual dietary specialisation in a population of wild koalas (Phascolarctos cinereus) in which individuals predominantly ate either Eucalyptus viminalis or Eucalyptus obliqua foliage. All six koalas that primarily ate E. viminalis in the wild avoided eating E. obliqua for more than 1 month in captivity. In contrast, all seven koalas that primarily ate E. obliqua could be maintained exclusively on this species in captivity, although they ate less from individual trees with higher foliar concentrations of unsubstituted B-ring flavanones (UBFs). Our results show that fundamental differences between individual animals allow some to exploit food resources that are less suitable for others. This could reduce competition for food, increase habitat carrying capacity, and is also likely to buffer the population against extinction in the face of habitat modification. The occurrence of fundamental individual specialisation within animal populations could also affect the perceived conservation value of different habitats, translocation or reintroduction success, and population dynamics. It should therefore be further investigated in other mammalian herbivore species.

Other papers of interest

This paper identifies the diverse ways in which participants engage with science, through the same citizen science project. Using multiple data sources, we describe various activities conducted by citizen scientists in an air quality project, and characterize the motivations driving their engagement. Findings reveal several themes, indicative of participants motivations and engagement; worried residents, education and outreach, environmental action, personal interest and opportunistic engagement. The study further illustrates the interconnectivity between science communication and citizen science practices and calls for nurturing this relationship for the mutual advancement of both fields.