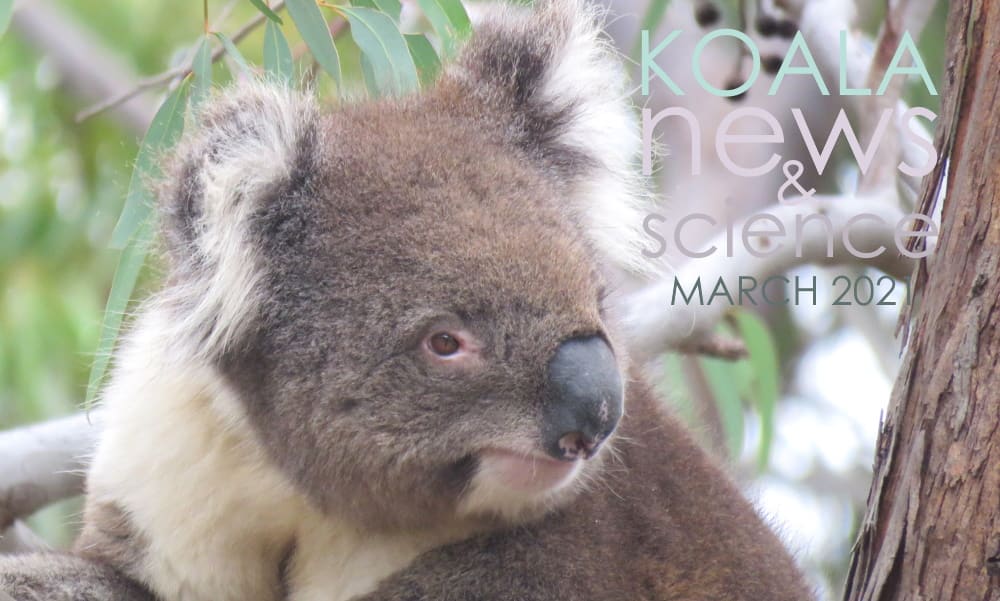 Koalas Need Trees: new campaign NSW 29 March
Nature Conservation Council of NSW have a 15 point plan to save koalas in NSW, are asking the public to sign up as a Koala Champion, and have a map of koala conservation groups in NSW.
https://www.nature.org.au/our-campaigns/koalas-need-trees/

Koala Core Habitat might derail Shenhua mine NSW 16 March
New evidence of an important koala population in a corridor Shenhua planned to destroy for a rain line for the Watermark mine may force a reassessment.
https://www.abc.net.au/news/2021-03-16/core-koala-habitat-threatens-to-derail-shenhua-watermark-mine/13248152

Lismore Friends of the Koala training for next bushfire season 18 March
With support from IFAW & Hunter Wildlife Rescue, Friends Of The Koala are hosting one day fire rescue training
https://www.echo.net.au/2021/03/lismores-friends-fo-the-koala-is-preparing-for-the-next-fire-season/

Trials to prevent koala deaths on roads Qld 24 March
‘Koala Shields’ are showing success in trials in south East Qld, and government plans to install them along the M1 near Oyster Creek Drive, 19th Avenue & Pine Creek Shopping Centre between Brisbane and the Gold Coast.
https://statements.qld.gov.au/statements/91779

Trees planted for koalas, a new koala hospital and other good news VIC 3 March
Fodor’s gives a brief overview of how some of the bushfire donations have been spent on koalas.
https://www.fodors.com/world/australia-and-the-pacific/australia/experiences/news/what-happened-to-the-australian-bushfire-koalas-spoiler-alert-weve-got-good-news

Koala mother and joey returned to Blue Mountains NSW 3 March
One of the Blue Mountains koalas taken into care by Science For Wildlife before the bushfire went through has been released safely, with a joey.
https://people.com/pets/australia-bushfires-koala-mom-baby-released/

Highlights
•The effect of Chlamydia on semen quality of naturally infected koalas and spermatozoa from Chlamydia negative koalas co-incubated in vitro with C. pecorum elementary bodies (EBs).
•Wild koalas displaying severe signs of clinical disease with C. pecorum present in the semen had significantly greater sperm DNA damage.
•The total % of morphologically abnormal spermatozoa was highest in wild koalas that had severe signs of clinical disease but whose semen was negative for C. pecorum. This is possibly associated with wild males having resolved the infection but still possessing underlining reproductive pathology.
•A higher incidence of loose head spermatozoa occurred in semen of wild koalas not infected with C. pecorum compared to those that were C. pecorum infected.
•In vitro incubation of semen with C. pecorum significantly decreased sperm motility and viability over 24h.

Although it is well established that chlamydial disease renders female koalas infertile, there has been limited research on its effects on male koala fertility, specifically sperm quality. This study determined whether chlamydial infection adversely affects semen quality of naturally infected koalas and spermatozoa recovered from Chlamydia negative koalas co-incubated in vitro with C. pecorum elementary bodies (EBs). Semen from 102 south-east Queensland sexually mature wild koalas exhibiting varying degrees of chlamydiosis and clinical signs of disease were assessed for semen quality and compared to 11 clinically healthy, Chlamydia-free captive male koalas. For in vitro studies, semen samples were collected from 6 Chlamydia-free captive koalas, and co-incubated over 24 h with high and low concentrations of C. pecorum EBs and sperm quality assessed. Wild koalas displaying severe signs of clinical disease with C. pecorum present in the semen had significantly greater sperm DNA damage (P = 0.0267). The total % of morphologically abnormal spermatozoa was highest in wild koalas that had severe signs of clinical disease but whose semen was negative for C. pecorum (P = 0.0328). This apparent contradiction is possibly associated with wild males having resolved the infection but still possessing underlining reproductive pathology. A higher incidence of loose head spermatozoa occurred in semen of wild koalas not infected with C. pecorum compared to those that were C. pecorum infected (P = 0.026). In vitro incubation of semen with C. pecorum significantly decreased sperm motility and viability over 24h.

Plantation forests are increasing worldwide and generally have lower biodiversity value than surrounding native vegetation. However, when established on previously cleared land, they can provide important habitat for some wildlife species and have positive conservation outcomes. In southern Australia, the establishment of southern blue gum (Eucalyptus globulus) plantations on cleared land has expanded the area of koala (Phascolarctos cinereus) habitat; however, koalas are at risk of injury, death and displacement when plantations are harvested. Consequently, an understanding of the response of koalas to harvesting is vital for developing management strategies that allow for plantation harvest while also improving welfare outcomes for koalas. We used GPS tracking and a before-after-control-impact (BACI) design to investigate the impact of blue gum plantation harvest on koala survival, body mass, reproduction, and movements. A total of 44 koalas (17 males, 27 females) from two plantations (one harvested, one unharvested) were monitored for 8 months encompassing before (5 weeks), during (11.5 weeks) and after (15.5 weeks) harvest. Survival was high with only two koalas (harvested plantation) dying of unknown causes but neither considered to be a direct result of harvesting. Harvesting did not have any detectable impact on body mass and pouch young production and only a minor effect on the amount of time koalas spent moving. By the end of the study period, 79% of the koalas originally living in the harvested plantation had moved to the surrounding plantations, while the remainder stayed within the harvested area in unharvested trees. In the unharvested plantation, 18% moved out and 82% remained. We attribute the high survival during harvest to active searching by koala ‘spotters’ ahead of harvesting machinery and subsequent retention of each koala’s tree and the surrounding eight trees. We suggest that the proximity of the harvested plantation to adjacent plantations facilitated safe dispersal of koalas out of the plantation, increasing the probability of survival and reducing the energy and movement distances. Our findings suggest that the plantation harvesting can result in minimal impact on resident koalas but that the influence of landscape context around harvested plantations should be the subject of future research.

Tramadol is used as an analgesic in humans and some animal species. When tramadol is administered to most species it undergoes metabolism to its main metabolites M1 or O-desmethyltramadol, and M2 or N-desmethyltramadol, and many other metabolites. This study describes the pharmacokinetic profile of tramadol when a single subcutaneous bolus of 2 mg/kg was initially administered to two koalas. Based on the results of these two koalas, subsequently 4 mg/kg as a single subcutaneous injection, was administered to an additional four koalas. M1 is recognised as an active metabolite and has greater analgesic activity than tramadol, while M2 is considered inactive. A liquid chromatography assay to quantify tramadol, M1 and M2 in koala plasma was developed and validated. Liquid chromatography-mass spectrometry confirmed that M1 had been identified. Additionally, the metabolite didesmethyltramadol was identified in chromatograms of two of the male koalas. When 4 mg/kg tramadol was administered, the median half-life of tramadol and M1 were 2.89 h and 24.69 h, respectively. The M1 plasma concentration remained well above the minimally effective M1 plasma concentration in humans (approximately 36 ng/mL) over 12 hours. The M1 plasma concentration, when tramadol was administered at 2 mg/kg, did not exceed 36 ng/mL at any time-point. When tramadol was administered at 2 mg/kg and 4 mg/kg the area under the curve M1: tramadol ratios were 0.33 and 0.50, respectively. Tramadol and M1 binding to plasma protein were determined using thawed, frozen koala plasma and the mean binding was 20% and 75%, respectively. It is concluded that when tramadol is administered at 4 mg/kg as a subcutaneous injection to the koala, it is predicted to have some analgesic activity.

Repeated retroviral infections of vertebrate germlines have made endogenous retroviruses ubiquitous features of mammalian genomes. However, millions of years of evolution obscure many of the immediate repercussions of retroviral endogenisation on host health. Here we examine retroviral endogenisation during its earliest stages in the koala (Phascolarctos cinereus), a species undergoing germline invasion by koala retrovirus (KoRV) and affected by high cancer prevalence. We characterise KoRV integration sites (IS) in tumour and healthy tissues from 10 koalas, detecting 1002 unique IS, with hotspots of integration occurring in the vicinity of known cancer genes. We find that tumours accumulate novel IS, with proximate genes over-represented for cancer associations. We detect dysregulation of genes containing IS and identify a highly-expressed transduced oncogene. Our data provide insights into the tremendous mutational load suffered by the host during active retroviral germline invasion, a process repeatedly experienced and overcome during the evolution of vertebrate lineages.

Habitat loss and natural catastrophes reduce the resources available to animals. Species can persist if they have access to additional resources and habitats through the processes of landscape complementation and supplementation. In arid and semi-arid ecosystems, where productivity is limited by precipitation, the impact of landscape change and prolonged drought is severe on specialist species whose range boundaries are limited by aridity. We examined the pattern of occurrence by a specialist arboreal folivore, the koala, at the periphery of its biogeographic range, in a semi-arid rangeland landscape. We used hierarchical mixed modelling to examine the effect of landscape change on koala populations and their habitat use during and after a prolonged drought. We found that the tree species and the distance of a site from water courses were the most important determinants for koala presence in these landscapes. Koalas were predominantly detected in riverine habitat along the water courses, which are primary habitat and provide refugia in times of drought and extreme heat. There was a strong positive effect from the interaction between the amount of primary and secondary habitat in the landscape, although individually, the amount of each of these habitats was not important. This shows koalas will persist in more intact landscapes. There was no difference in habitat use between dry and wet years, but we consider that it can take several wet seasons for koalas to expand into habitats away from water courses.