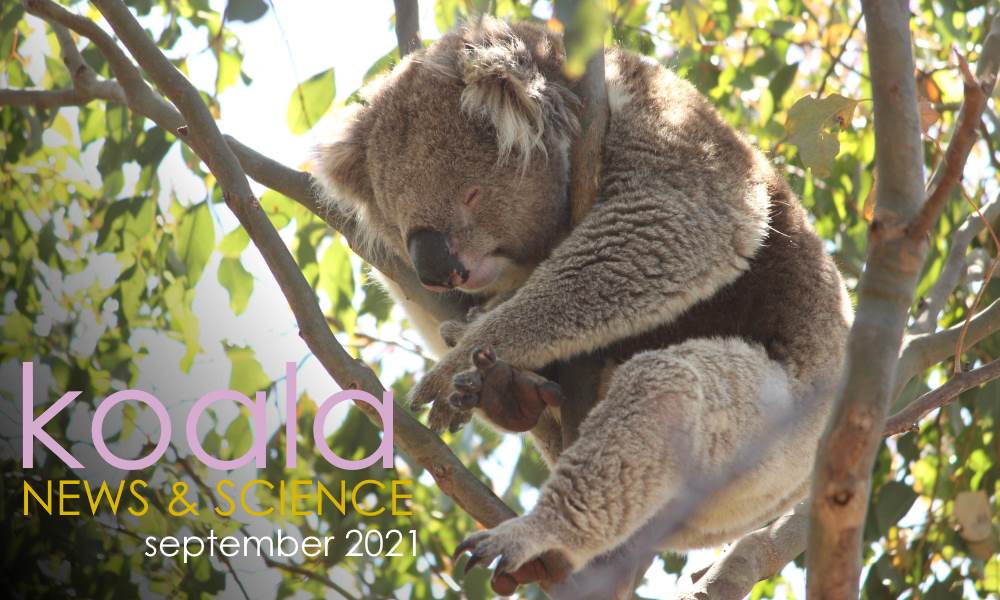 Koalas the symbol of Australian climate inaction at COP26 29 September
Australian comedian Dan Ilic has designed and paid for a billboard to be shown during the UN Climate Conference in Glasgow, using koalas as a symbol for Australian government lack of action on climate change. The billboard poses as a tourism ad, and reads “Cuddle a koala (before we make them extinct)” and shows bulldozers destroying forests. The $12,000 fee for the billboard was crowdfunded in just 12 hours.
https://www.abc.net.au/news/2021-09-29/crowdfunded-billboard-at-cop26-dan-ilic-climate-change/100499974

University of Sydney scientists to make full koala genome available to all 29 September
Dr Carolyn Hogg and team are sequencing the genome from 450 koalas right across the species range, and making the data available to researchers all over the world, through the Amazon Web Services Open Data Sponsorship Program.
https://www.aboutamazon.com/news/aws/the-450-koalas-that-could-help-save-their-species

Funding for koala habitat in Gippsland VIC 30 September
Raymond Island Landcare have been successful in gaining a $160,000 bushfire recovery grant to revegetate 8 hectares as wildlife habitat on the island in the Gippsland Lakes.
https://www.miragenews.com/160000-for-crucial-habitat-for-gippsland-lakes-642280/

Results from South Gippsland koala surveys VIC 29 September
The latest results from Friends Of The Earth koala surveys in Holey Plains, Wron Wron and Mulungdung forest areas show low numbers of the genetically-diverse Strzelecki koalas. In total,43,000 hectares of land have been surveyed in the region, with a total population of around 1200 koalas. The most favoured tree species for koalas is Mountain Grey Gum.
https://www.gippslandtimes.com.au/news/2021/09/28/concerns-over-gippslands-low-koala-numbers/

Restor revegetation platform launches on October 13
New global platform for ecosystem restoration will launch to the public on October 13 at the Countdown TED event in Edinburgh, Scotland prior to the COP 26 UN Climate Conference in Glasgow. The platform aims to measure restoration efforts, increase transparency, connect practitioners with science and donors. The site already holds data on 71,000 revegetation projects worldwide, over 100 of them in Australia.
https://restor.eco/
https://countdown.ted.com/
https://news.mongabay.com/2021/07/global-restoration-now-has-an-online-meeting-point/

Fundraising for more koala road signs at Bangalow NSW 24 September
Bangalow Koalas are raising money to buy and install 30 koala signs around the Northern Rivers to inform motorists to watch out.
https://www.echo.net.au/2021/09/fundraising-for-koala-signs-for-bangalow/

Bylong Coal Mine rejected NSW 14 September
Local community group Bylong Valley Protection Alliance has won again: the proposed coal mine in the Bylong Valley, north of Mudgee, has been rejected for the third time. The NSW IPC cited greenhouse gas emissions as reason for the rejection.
https://www.edo.org.au/2021/09/14/bylong-community-wins-again-as-coal-mine-appeal-is-dismissed/

Study underway to learn about how koalas cope with fires. 23 September
A framework was developed by the Threatened Species Recovery Hub and scientists from the University of Queensland and University of Sydney, on better management of fires and their impacts on koalas.
https://phys.org/news/2021-09-koala-behavior.html
https://www.nespthreatenedspecies.edu.au/publications-and-tools/better-managing-fires-and-their-impacts-for-koala-conservation-report

Campaign to make ecocide an international crime progresses 20 September
Stop Ecocide International has drafted an historic definition of ecocide, and will be bringing it to the International Criminal Court. Ecocide is defined as “unlawful or wanton acts committed with knowledge that there is a substantial likelihood of severe and widespread or long-term damage to the environment caused by those acts”. If accepted, ecocide will join four other international crimes: genocide, crimes against humanity, war crimes, and crimes of aggression.
https://www.stopecocide.earth/
https://www.sundaypost.com/fp/earths-lawyer/

Cryptocurrency alliance announces fundraiser for tree planting, including some in Australia 28 September
An alliance of cryptocurrency organisations worldwide has pledged to raise funds to plant 10 million trees worldwide.
https://dailyhodl.com/2021/09/28/binance-charity-launches-nft-tree-planting-project-tree-millions-to-plant-10-million-trees-worldwide/

25,000 koala trees planted around Geelong region 24 September
Koala Clancy Foundation have concluded their tree planting season planting 25,359 trees in the rivers, creeks and drainage lines around Geelong. Another 20,000 trees are in progress in East Gippsland.
https://geelongindy.com.au/news/24-09-2021/planting-for-koalas-future/

The koala, Phascolarctos cinereus, is an iconic Australian wildlife species facing a rapid decline in South-East Queensland (SEQLD). For conservation planning, the ability to estimate the size of koala populations is crucial. Systematic surveys are the most common approach to estimate koala populations but because of their cost they are often restricted to small geographic areas and are conducted infrequently. Public interest and participation in the collection of koala sighting data is increasing in popularity, but such data are generally not used for population estimation. We modeled monthly sightings of koalas reported by members of the public from 1997 to 2013 in SEQLD by developing a self-exciting spatio-temporal point process model. This allowed us to account for characteristics that are associated with koala presence (which vary over both space and time) while accounting for detection bias in the koala sighting process and addressing spatial clustering of observations. The density of koalas varied spatially due to the heterogeneous nature of koala habitat in SEQLD, with a mean density of 0.0019 koalas per km2 over the study period. The percentage of land areas with very low densities (0–0.0005 koalas per km2) remained similar throughout the study period representing, on average, 66% of the total study area. The approach described in this paper provides a useful starting point to allow greater use to be made of incidental koala sighting data. We propose that the model presented here could be used to combine systematic koala survey data (which is spatially restricted, but more precise) with koala sighting data (which is incidental and often biased by nature, but often collected over large geographical areas). Our approach could also be adopted for modeling the density of other wildlife species where data is collected in the same manner.

Context: Drones, or remotely piloted aircraft systems equipped with thermal imaging technology (RPAS thermal imaging), have recently emerged as a powerful monitoring tool for koala populations. Before wide uptake of novel technologies by government, conservation practitioners and researchers, evidence of greater efficiency and cost-effectiveness compared to other available methods is required. Aims: We aimed to provide the first comprehensive analysis of the cost-effectiveness of RPAS thermal imaging for koala detection against two field-based methods, systematic spotlighting (Spotlight) and the refined diurnal radial search component of the spot assessment technique (SAT).

Koala populations are currently in rapid decline across Australia, with infectious diseases being a contributing cause. The koala retrovirus (KoRV) is a gammaretrovirus present in both captive and wild koala colonies that presents an additional challenge for koala conservation in addition to habitat loss, climate change, and other factors. Currently, nine different subtypes (A to I) have been identified; however, KoRV genetic diversity analyses have been limited. KoRV is thought to be exogenously transmitted between individuals, with KoRV-A also being endogenous and transmitted through the germline. The mechanisms of exogenous KoRV transmission are yet to be extensively investigated. Here, deep sequencing was employed on 109 captive koalas of known pedigree, housed in two institutions from Southeast Queensland, to provide a detailed analysis of KoRV transmission dynamics and genetic diversity. The final dataset included 421 unique KoRV sequences, along with the finding of an additional subtype (KoRV-K). Our analysis suggests that exogenous transmission of KoRV occurs primarily between dam and joey, with evidence provided for multiple subtypes, including nonendogenized KoRV-A. No evidence of sexual transmission was observed, with mating partners found to share a similar number of sequences as unrelated koala pairs. Importantly, both distinct captive colonies showed similar trends. These findings indicate that breeding strategies or antiretroviral treatment of females could be employed as effective management approaches in combating KoRV transmission.

Australia is in the midst of an extinction crisis, having already lost 10% of terrestrial mammal fauna since European settlement and with hundreds of other species at high risk of extinction. The decline of the nation’s biota is a result of an array of threatening processes; however, a comprehensive taxon-specific understanding of threats and their relative impacts remains undocumented nationally. Using expert consultation, we compile the first complete, validated, and consistent taxon-specific threat and impact dataset for all nationally listed threatened taxa in Australia. We confined our analysis to 1,795 terrestrial and aquatic taxa listed as threatened (Vulnerable, Endangered, or Critically Endangered) under Australian Commonwealth law. We engaged taxonomic experts to generate taxon-specific threat and threat impact information to consistently apply the IUCN Threat Classification Scheme and Threat Impact Scoring System, as well as eight broad-level threats and 51 subcategory threats, for all 1,795 threatened terrestrial and aquatic threatened taxa. This compilation produced 4,877 unique taxon–threat–impact combinations with the most frequently listed threats being Habitat loss, fragmentation, and degradation (n = 1,210 taxa), and Invasive species and disease (n = 966 taxa). Yet when only high-impact threats or medium-impact threats are considered, Invasive species and disease become the most prevalent threats. This dataset provides critical information for conservation action planning, national legislation and policy, and prioritizing investments in threatened species management and recovery.