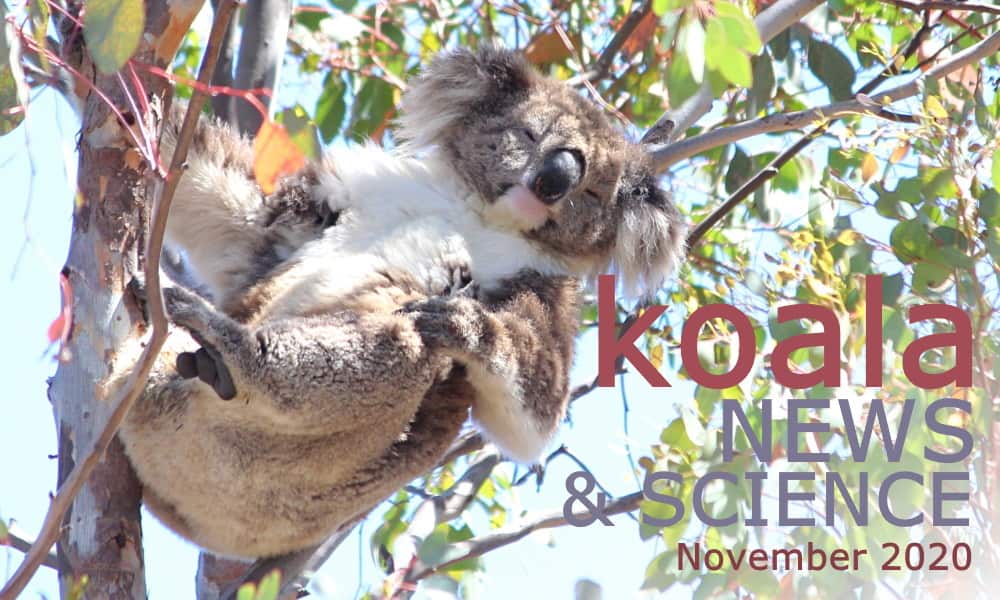 3 crossbench senators have said they will block a government bill to weaken the EPBC act by handing responsibility to the states. Crossbench senators felt the government were hiding important details from the senate.
https://www.abc.net.au/news/2020-11-28/federal-environment-law-reforms-set-to-be-blocked-by-senate/12930328

Review of forestry in NSW after EPA stands up against Forestry Dept. 27 November

NSW government are planning a review of forestry operations after the EPA issued several stop work orders against state-owned Forestry Corporation for breaches of licence in bushfire-affected areas.
https://www.theguardian.com/australia-news/2020/nov/27/logging-in-nsw-bushfire-hit-coastal-regions-to-be-reviewed-after-stand-off-between-industry-and-epa?

WWF have launched a $300million plan for revegetation, koala protection, renewable energy and innovation. They say its the biggest investment in nature regeneration in Australia’s history.
https://www.wwf.org.au/what-we-do/regenerate-australia#gs.mkxe0f
and https://www.news.com.au/technology/science/animals/wwf-to-double-koala-population-by-2050-with-regenerate-australia-plan/news-story/fbf110f801071c0ef117548b500b8661

Researchers from University of Newcastle, supported by FAUNA Research Alliance have launched a community survey to help develop an overview of the koala population around Port Stephens.
https://www.newcastle.edu.au/newsroom/featured/researchers-call-on-port-stephens-community-to-help-save-the-koala
Find the survey here: https://faunaresearchalliance.com/fauna/projects/koala/#

Author Janine Duffy has been invited as a regular guest on The Sustainable Hour radio, part of the Centre For Climate Safety podcast. Janine will present a rundown of the top koala news & science on the show, on the first Wednesday of every month at 11am-12 noon.
https://climatesafety.info/tag/the-sustainable-hour/

A male koala was seen at Yourka, a Bush Heritage reserve west of Tully, the first seen in the area for over a decade.
https://www.abc.net.au/news/2020-11-16/koala-spotted-at-yourka-reserve-far-north-queensland/12881064

Science For Wildlife have launched a community survey to assess attitudes towards protecting koalas.
https://www.hawkesburygazette.com.au/story/7018434/should-we-save-our-koalas-survey-to-identify-willing-participants/

Australia won the Lonely Planet Best In Travel Award for Community Restoration, and efforts to assist koalas after the Black Summer bushfires were the highlighted. Koala News & Science author Janine Duffy was the main spokesperson for Australia.
https://www.lonelyplanet.com/best-in-travel?c=community&id=restoration
https://youtu.be/BF50XVZmqpo

Koala Wars are on again in NSW 20 November

Liberal MLC Catherine Cusack sacked after crossing the floor to vote against government bill. The controversial LLS is now scrapped and will be re-drafted.
https://www.edo.org.au/2020/11/20/controversial-nsw-koala-bill-defeated-by-single-vote/

Koalas (Phascolarctos cinereus) are cryptic and currently face regional extinction. The direct detection (physical sighting) of individuals is required to improve conservation management strategies. We provide a comparative assessment of three survey methods for the direct detection of koalas: systematic spotlighting (Spotlight), remotely piloted aircraft system thermal imaging (RPAS), and the refined diurnal radial search component of the spot assessment technique (SAT). Each survey method was repeated on the same morning with independent observers (03:00–12:00 hrs) for a total of 10 survey occasions at sites with fixed boundaries (28–76 ha) in Port Stephens (n = 6) and Gilead (n = 1) in New South Wales between May and July 2019. Koalas were directly detected on 22 occasions during 7 of 10 comparative surveys (Spotlight: n = 7; RPAS: n = 14; and SAT: n = 1), for a total of 12 unique individuals (Spotlight: n = 4; RPAS: n = 11; SAT: n = 1). In 3 of 10 comparative surveys no koalas were detected. Detection probability was 38.9 ± 20.03% for Spotlight, 83.3 ± 11.39% for RPAS and 4.2 ± 4.17% for SAT. Effective detectability per site was 1 ± 0.44 koalas per 6.75 ± 1.03 hrs for Spotlight (1 koala per 6.75 hrs), 2 ± 0.38 koalas per 4.35 ± 0.28 hrs for RPAS (1 koala per 2.18 hrs) and 0.14 ± 0.14 per 6.20 ± 0.93 hrs for SAT (1 koala per 43.39 hrs). RPAS thermal imaging technology appears to offer an efficient method to directly survey koalas comparative to Spotlight and SAT and has potential as a valuable conservation tool to inform on-ground management of declining koala populations

Most retroviral endogenization and host adaptation happened in the distant past, with the opportunity to study these processes as they occurred lost to time. An exception exists with the discovery that koala retrovirus (KoRV) has recently begun its endogenization into the koala (Phascolarctos cinereus) genome. What makes this opportunity remarkable is the fact that Northern Australian koalas appear to be undergoing endogenization with one KoRV subtype (KoRV‐A), while all subtypes (KoRV‐A‐I) co‐exist exogenously, and Southern Australian koalas appear to carry all KoRV subtypes as an exogenous virus. To understand the distribution and relationship of all KoRV variants in koalas, the proviral KoRV envelope gene receptor binding domain was assessed across the koala’s natural range. Examination of KoRV subtype‐specific proviral copy numbers per cell found KoRV‐A proviral integration levels consistent with endogenous incorporation in Northern Australia (Southeast Queensland and Northeast New South Wales) while revealing lower levels of KoRV‐A proviral integration (suggestive of exogenous incorporation) in southern regions (Southeast New South Wales and Victoria). Phylogeographic analysis indicated that several major KoRV‐A variants were distributed uniformly across the country, while non‐KoRV‐A variants appeared to have undergone lineage diversification in geographically distinct regions. Further analysis of the major KoRV‐A variants revealed a distinct shift in variant proportions in Southeast New South Wales, suggesting this as the geographic region where KoRV‐A transitions from being predominantly endogenous to exogenous in Australian koalas. Collectively, these findings advance both our understanding of KoRV in koalas and of retroviral endogenization and diversification in general.

Oxalate nephrosis is a leading disease of the Mount Lofty Ranges koala population in South Australia, but the cause is unclear. In other herbivorous species, a common cause is high dietary oxalate; therefore this study aimed to determine the oxalate content of eucalypt leaves. Juvenile, semimature and mature leaves were collected during spring from eucalypt species eaten by koalas in the Mount Lofty Ranges and compared with those from Moggill, Queensland, where oxalate nephrosis has lower prevalence. Total oxalate was measured as oxalic acid by high-performance liquid chromatography. The oxalate content of eucalypts was low (<1% dry weight), but occasional Mount Lofty leaf samples had oxalate levels of 4.68–7.51% dry weight. Mount Lofty eucalypts were found to be higher in oxalate than those from Queensland (P < 0.001). In conclusion, dietary oxalate in eucalypt leaves is unlikely to be the primary cause of oxalate nephrosis in the Mount Lofty koala population. However, occasional higher oxalate levels could cause oxalate nephrosis in individual koalas or worsen disease in those already affected. Further studies on the seasonal variation of eucalypt leaf oxalate are needed to determine its role in the pathogenesis of oxalate nephrosis in koalas.