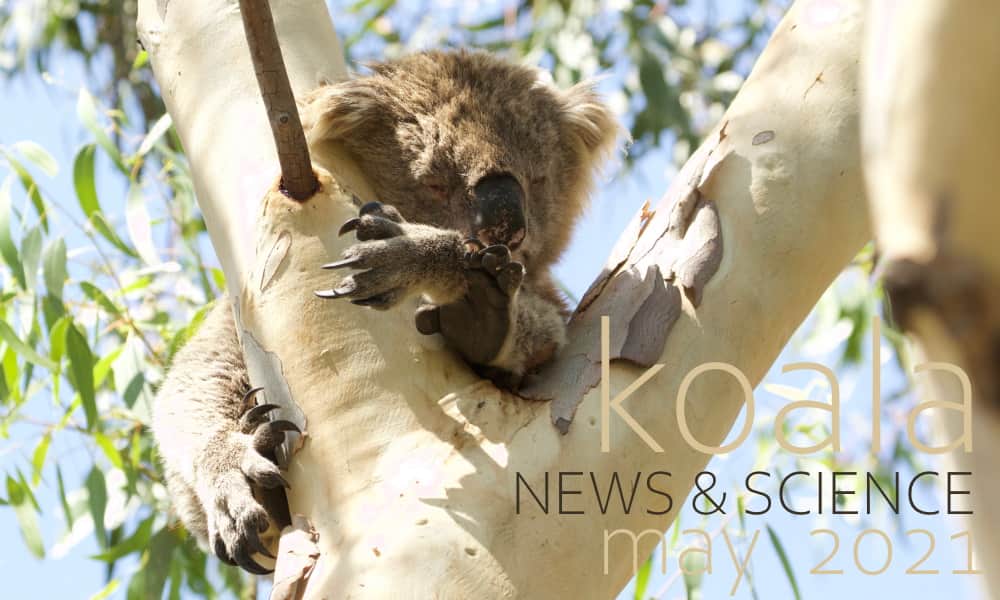 Queenslanders asked to participate in UQ survey about koalas
Renae Charalambous, PhD candidate at University of Queensland, seeks community input on koala conservation. The survey will take about 20 minutes and is only open to Queensland residents.
https://uniofqueensland.syd1.qualtrics.com/jfe/form/SV_cA9aUbTztryw1Ho?fbclid=IwAR1b5dEamLpJDUonsP81AhGIRQQQO_-SGnt3MqjaRSlT2k5iGqDsFOCm_IY

Water For Wildlife launched in Lismore NSW 29 May
800 Tree Troffs: water stations for koalas funded by bushfire donations to WIRES; are starting to be distributed to landowners Australia-wide. The first water stations are ready in Lismore, northern NSW.
https://www.abc.net.au/news/2021-05-29/water-for-wildlife-wires-lismore-koalas-nsw-water-stations/100173496

Greens introduce bill to support Great Koala National Park 14 May
NSW Greens MP Cate Faehrmann announced that she will introduce the bill to NSW Parliament to support koalas and jobs. A private members bill on the same subject has already been introduced to the Legislative Council on 13 May.
https://greens.org.au/nsw/news/greens-give-notice-bill-great-koala-national-park
https://www.parliament.nsw.gov.au/bills/Pages/Profiles/national-parks-and-wildlife-amendment-great-koala-national-park-bill-2021.aspx

$20,000 raised to care for koalas in Gold Coast QLD
A fundraising event on Burleigh beach has raised over $20,000 for Currumbin wildlife hospital to care for koalas. The event set a world record for the most people on a beach wearing koala ears.
https://www.mygc.com.au/watch-over-20k-raised-at-gold-coast-beach-parade-to-save-koalas/

Drones and machine learning-based automated detection methods are being used by ecologists to conduct wildlife surveys with increasing frequency. When traditional survey methods have been evaluated, a range of factors have been found to influence detection probabilities, including individual differences among conspecific animals, which can thus introduce biases into survey counts. There has been no such evaluation of drone-based surveys using automated detection in a natural setting. This is important to establish since any biases in counts made using these methods will need to be accounted for, to provide accurate data and improve decision-making for threatened species. In this study, a rare opportunity to survey a ground-truthed, individually marked population of 48 koalas in their natural habitat allowed for direct comparison of the factors impacting detection probability in both ground observation and drone surveys with manual and automated detection. We found that sex and host tree preferences impacted detection in ground surveys and in manual analysis of drone imagery with female koalas likely to be under-represented, and koalas higher in taller trees detected less frequently when present. Tree species composition of a forest stand also impacted on detections. In contrast, none of these factors impacted on automated detection. This suggests that the combination of drone-captured imagery and machine learning does not suffer from the same biases that affect conventional ground surveys. This provides further evidence that drones and machine learning are promising tools for gathering reliable detection data to better inform the management of threatened populations.

Koala retrovirus (KoRV) is a significant threat to koalas across Australia. Koalas in northern koala populations (from New South Wales and Queensland) have KoRV inserted into their DNA and inherited to their offspring. Southern koala populations (from Victoria and South Australia) have KoRV infection spread through close contact of koalas. As such, there are koalas within South Australia that are not infected with KoRV. Accurate diagnosis of the infection of each koala is therefore fundamental for disease studies. Previous studies have shown differences in prevalence of different KoRV genes in the Mount Lofty Ranges Koala population; therefore, clarification is necessary. This study uses a large cohort (n = 216) and defines the diagnostic regions of the KoRV genome within the South Australian population. Using multiple molecular techniques, it demonstrates strong evidence for two clear groupings of koalas: KoRV positive and KoRV negative. Within this study, a population of 41% were shown to be KoRV positive and 57% were KoRV negative, with 2% inconclusive. This differentiation is of great importance when examining the clinical importance of KoRV infection within southern koalas.

How can we as individuals or groups mitigate climate change? One key issue is whether motives other than the pursuit of material self-interest can be used fruitfully to reduce climate change. In this article I describe recent research that supports three deeply rooted concerns: (a) concern with other humans (prosociality), (b) concern with equality (egalitarianism), and (c) concern with animals (as part of adherence to biospheric values). Because one of the chief issues regarding climate change is its abstractness, it is important in public education to highlight the concreteness of climate change’s harm done (a) to other people, such as (grand)children, (b) to people suffering the most (and having contributed the least to climate change), and (c) to key aspects of nature, including not only ‘adorable animals’ (such as pandas or koalas), but even the suffering and threat of extinction of butterflies and other insects.

Sexual selection is often characterized by polygynous breeding systems, size dimorphism, and skewed operational sex ratios. Koalas are sexually dimorphic in multiple domains, yet are absent from the literature on sexual selection and the structure of their mating system is unclear. We provide the first documentation of the strength of sexual selection in koalas by using microsatellite markers to identify sires. We combine the genetic data with morphological data in order to assess the role of body size in regulating reproductive output. During our 4-year study, 37% of males were identified as possible sires. Males were significantly larger than females, with sires heavier than non-sires. Male body mass correlated with annual reproductive output, with Crow’s Index of Opportunity for Selection revealing that variation in male reproductive success was threefold higher than that of females. Since it appears that male koalas rarely engage in physical confrontations over access to females, size dimorphism could be based upon non-agonistic competition and/or female mate choice. We propose that size dimorphism in koalas evolved as a consequence of endurance rivalry promoting vocal sexual advertisements that attract females. We suggest that female choice is a key mediator of male reproductive output.