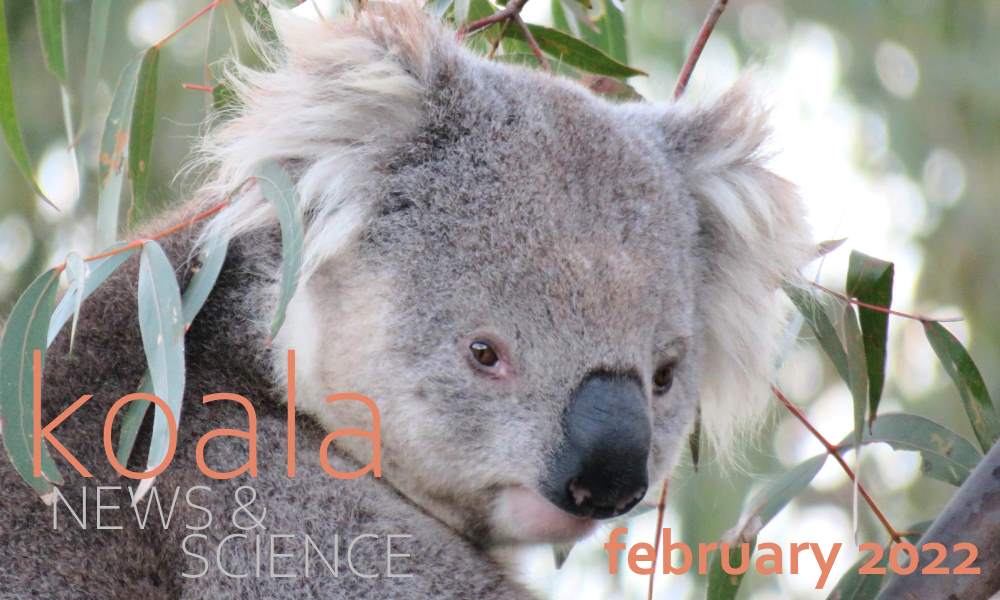 Our thoughts are with all on the frontline of the flooding disaster in southern Queensland and northern NSW at this time.

Offer to ‘Rent out koalas” may spark a change in legislation 1 March
The Australian Reptile Park’s advertisement offering to rent out a koala to private parties and events was quickly removed after a backlash from conservation groups. The practice, labelled “horrendous” by MP Cate Faehrmann at a government budget estimates hearing, and NSW Environment Minister agreed it was not ok. NSW government may consider law reform to prohibit the practice.
https://www.canberratimes.com.au/story/7640539/zoos-renting-out-koalas-not-ok-govt/

Guula, Koala, critical to First Nations People in NSW 15 February
Birrbay and Dhanggati woman Gulwanyang Moran tells how her people’s identity is endangered as their totem koala is endangered.
https://www.sbs.com.au/nitv/article/2022/02/15/first-nations-people-share-importance-koala-wake-endangered-status

Endangered ruling may help SA koalas 11 February
South Australian koala experts are hoping that though SA koalas were not included in endangered status of east coast koalas, the renewed focus may help research and conservation.
https://indaily.com.au/news/2022/02/11/endangered-koala-ruling-expected-to-boost-sa-research-efforts/

Government widely criticised for their role in koala decline 11 February
A Koala recovery plan had been required for the last 10 years, but was not created by any federal government in that time. Only in response to the Black Summer bushfires did the government start on a draft last year.
https://www.theguardian.com/environment/2022/feb/11/koala-listed-as-endangered-after-australian-governments-fail-to-halt-its-decline

Victorian Koala populations finally recognised as facing threats 19 February
Some koala populations in Victoria are facing the same threats as those in Queensland & NSW. Deakin University’s Dr Desley Whisson said that its important for Victorians to start protecting and creating koala habitat.
https://www.abc.net.au/news/2022-02-19/victoria-koala-population-struggling-in-some-locations/100828136

Conservation management is critical for threatened wildlife species and an effective conservation approach relies on good understanding of animal behaviour in natural habitat. Currently, koalas are listed as vulnerable to extinction in Australia with declining populations, but their social and breeding system remains unclear. Male koala vocalisations, known as bellows, are believed to be closely related to their breeding behaviour. Bellows incorporate callers’ body size information which can be perceived by other koalas. In this study, we tested the behavioural responses of 20 GPS-collared free ranging koalas to bellow recordings collected from small (<6 kg) and large (>8.5 kg) adult male koalas. We report evidence of intra-male competition, with adult males approaching bellow playbacks, particularly those from small-sized males. In contrast, juvenile males under three years of age showed avoidance of the playbacks. No patterns in the response of females were detected. Our results provide the strongest evidence yet that bellows are primarily a means by which males occupy and control habitat space during the breeding season. Future studies are required to see if female response to bellows depends on their reproductive status.

Aim Mega-fires are predicted to increase with climate change. Australia experienced the largest ever documented forest fires in 2019–2020, but the response of most taxa remains poorly known. We used acoustic arrays to estimate impact of the mega-fires on the density of an iconic marsupial.
Location North-east New South Wales, Australia.
Time period Pre-fire density estimated in 2018–2019 and post-fire density in 2019–2020.
Major taxa studied Koala, Phascolarctos cinereus.
Methods We estimated male density before and after fires using large acoustic arrays and spatial count models. Acoustic arrays sampled three timber production forests with a gradient in fire severity and three unburnt controls in national parks.
Results Koalas were temporarily extirpated where high fire severity dominated the landscape, but some localized recovery was evident after 1 year. Where moderate severity fire dominated, density was reduced by about 50% within 1 year, but koalas were widespread throughout the burnt area. In our third area dominated by low severity fire, no impact was detected as pre- and post-fire uncertainty intervals overlapped. Control sites surveyed at similar times showed little change in density between years. There was no relationship between pyrodiversity and koala density. Within arrays broadly dominated by moderate or high severity fire, density 1 year after fire was lower in burnt patches of both low and high severity fire. Regionally, 9.8% of landscape samples (2 km × 2 km) in koala habitat were dominated by high fire severity, while a further 6.1% were dominated by moderate fire severity, suggesting c. 13% decline in koala density.
Main conclusions A substantial impact of high severity fire was confirmed. Severe impacts were localized across the landscape, recovery had begun within a year and resilience was evident where low severity fire dominated. However, more frequent fires in the future will compound koala losses.

Background
The koala (Phascolarctos cinereus), an iconic yet endangered specialised folivore experiencing widespread decline across Australia, is the focus of many conservation programs. Whilst animal translocation and progressive conservation strategies such as faecal inoculations may be required to bring this species back from the brink of extinction, insight into the variation of host-associated gut microbiota and the factors that shape this variation are fundamental for their success. Despite this, very little is known about the landscape variability and factors affecting koala gut microbial community dynamics. We used large scale field surveys to evaluate the variation and diversity of koala gut microbiotas and compared these diversity patterns to those detected using a population genetics approach. Scat samples were collected from five locations across South East Queensland with microbiota analysed using 16S rRNA gene amplicon sequencing.
Results
Across the landscape koala gut microbial profiles showed large variability, with location having a large effect on bacterial community composition and bacterial diversity. Certain bacteria were found to be significantly differentially abundant amongst locations; koalas from Noosa showed a depletion in two bacterial orders (Gastranaerophilales and Bacteroidales) which have been shown to provide beneficial properties to their host. Koala gut microbial patterns were also not found to mirror population genetic patterns, a molecular tool often used to design conservation initiatives.
Conclusions
Our data shows that koala gut microbiotas are extremely variable across the landscape, displaying complex micro- and macro- spatial variation. By detecting locations which lack certain bacteria we identified koala populations that may be under threat from future microbial imbalance or dysbiosis. Additionally, the mismatching of gut microbiota and host population genetic patterns exposed important population structure that has previously gone undetected across South East Queensland. Overall, this baseline data highlights the importance of integrating microbiota research into conservation biology in order to guide successful conservation programs such as species translocation and the implementation of faecal inoculations.

Background: The current prognosis for successful return to function in koalas with appendicular fractures is poor despite being the most common fracture type to result in successful rehabilitation. The forelimb, particularly the humerus, plays a critical role in stabilisation and support while climbing trees. Successful rehabilitation therefore requires adequate internal stabilisation to promote bone healing and faster return to function. Current knowledge of koala limb bone morphometry is lacking and would provide useful clinical insight for future orthopaedic research, particularly with regards to recommendations regarding implant size and type. In this study microcomputed tomography (micro-CT) was used to describe bone length, internal and external diameters, and cortical thickness at five transverse levels along the humerus of skeletally mature koala cadavers. Qualitative descriptions were also made regarding bone features deemed clinically relevant to potential fracture repair techniques. Results: Mean humeral length was 114.3 mm (95% CI 107.29 – 121.31 mm). Mediolateral diameters were greater than craniocaudal diameters at each measurement level, and the diaphysis has a distally tapering medullary cavity. Diaphyseal cortices were relatively homogenous with slight distal thickening, and medial cortices were thickest along the entire bone. The bone protuberances of the deltoid and supinator ridges projected most of the way down the lateral surface of the bone while the medial surface remained relatively uniform. Distal to the deltoid ridge the humerus curved caudally, terminating at a craniocaudally flattened distal epiphysis. Conclusion: Morphometric descriptions provided in this study will serve as a useful reference for future research, guiding orthopaedic surgery and improving prognosis of koala humeral fractures.

Management decisions that do not adequately align with the values and opinions of the public-at-large can lead to controversy and conflict. In conservation and natural resource management, knowledge of the public’s values and opinions are often assumed or based on the personal perceptions of experts, rather than on empirical evidence. Mismatches can occur, and in Australia, an ongoing debate about how to best manage overabundant koalas has divided experts and members of the public for decades. On several occasions, experts have recommended culling of overabundant koalas, and yet culls are rarely conducted by managers. Anecdotally this is due to perceived public opposition to the culling of koalas, but there is little empirical evidence to evaluate this assessment. Using a nationwide survey, we investigated the social acceptability of different options for koala management in a population of experts and the general public, and how underlying environmental values and basic beliefs about human-wildlife relationships can explain differences of opinion. We found significant differences in the acceptability of management options between experts and the general public, although the polarity of acceptability was mostly the same. However, the lethal management options of culling and indigenous hunting elicited opposing opinions. Consistent with previous research, beliefs about human-wildlife relationships and belief profiles were found to be useful in explaining differences in acceptability of lethal control among the public, but not among experts. Biospheric values and increased experience and knowledge could play a greater role in the formation of experts’ acceptability judgements. Due consideration of evidence-based knowledge of people’s opinions can avoid reactive decision-making based on the opinions of a vocal minority. Where differences of opinion exist between experts and the general public, reconciling these divergent views should lead to better conservation outcomes with reduced conflict over potentially controversial management actions.